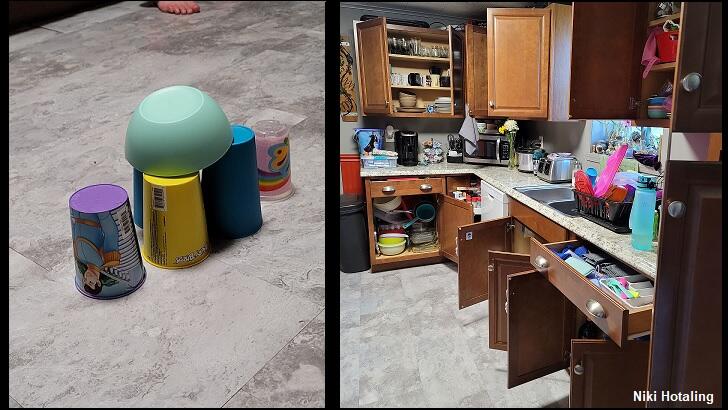 A series of strange events unfolding in the home of a family in New York state has them wondering if their residence is haunted. Sharing her story on Facebook, Niki Hotaling explained that the eerie activity began on Monday when she noticed that some balloons that had been tightly tied around a doorknob had inexplicably become untethered and were floating around the house seemingly with some agency of their own. Initially thinking that perhaps their kids were playing a prank on them, she started to have second thoughts when things got weirder on Wednesday evening.

According to Hotaling, when their dishwasher finished its cycle that night, she left its door open so that the dishes could dry and proceeded to sit with her husband in the adjoining living room for approximately 45 minutes. Certain that no one had entered the kitchen during that time, when she returned to the room, she was stunned to see that several cups as well as a bowl were sitting on the floor arranged into some kind of mysterious formation (seen on the left in the image above). "It is physically impossible for one of the kids to have stacked the cups," she said, "because of where we were sitting the entire time, they would have had to walk right past us."

Hotaling and her family did not have to wait very long for the next odd event as she woke up on Friday morning to discover that all of their kitchen cabinets, which are secured with child locks, had been opened in the middle of the night (seen on the right in the image above). Now fairly convinced that some kind of ghostly presence is behind the puzzling activity, the bewildered mom tells us that "far I feel safe and it seems non-threatening." That said, the family has enlisted "a reputable psychic medium" who will be visiting the residence, which is located in the community of Gasport, on Tuesday evening "to help get some answers possibly and then cleanse our home."