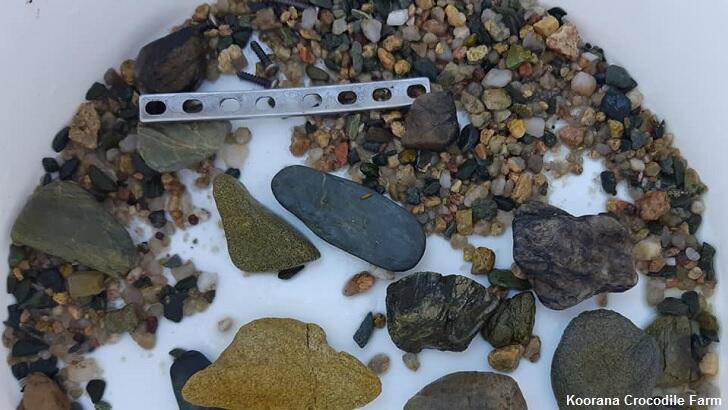 An Australian crocodile farmer was left mystified when he performed an autopsy on one of the facility's resident reptiles that had recently passed away and found a surgical plate in the creature's stomach. The unsettling discovery of the nearly four-inch-long piece of metal reportedly took place at the Koorana Crocodile Farm in Queensland last week.

The creature in question, a 15-foot-long crocodile dubbed 'MJ,' died about a month ago and, in the normally routine process of determining the cause of the reptile's death, the contents of its stomach were examined. According to a Facebook post from the farm, that's when they found the mysterious metal plate "amongst numerous stones he used as gastroliths to help grind up food."

The odd object has proven to be quite the riddle as the farm says that there are no serial numbers or any other form of identification on the plate, although they somehow know that it came from Switzerland. Joking that "no staff and no pets are missing," they noted that they had purchased MJ from another farm about six years ago and, prior to that, the creature had lived in the wild.

To that end, based on the condition of the surgical plate, they surmised that it was "likely to have been in the stomach for decades." As to the origins of the object, an orthopedic surgeon who looked at pictures of the creepy find indicated that it appeared to the type of piece used in surgery on humans. The farm owners hope that by sharing images of the plate, they can determine its source and possibly "help solve a cold case" or, at the very least, "put some minds at rest."