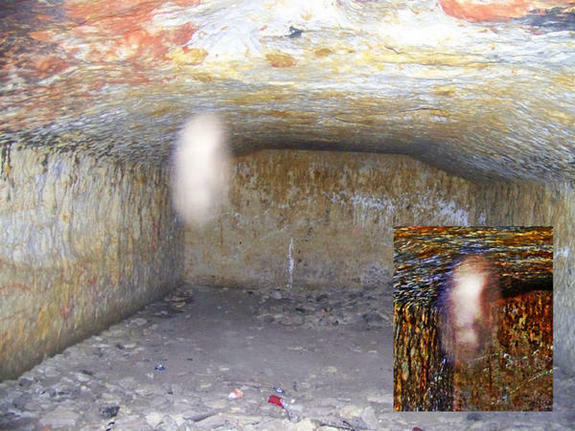 This photo was taken at dusk the evening of May 10, 2014. This man-made cave was used by the state hospital that formerly stood on what is now the Quarry Hill Nature Center in Rochester, MN (formerly the site of the Second Minnesota Hospital for the Insane). The cave has an interesting history. The workers at the hospital had to wait until spring for the ground to thaw enough so they could bury the people that had died over wintertime. This cave was used as storage for bodies until the spring thaw. This photo was taken through a metal grate into the cave. Upon seeing the apparition in the digital camera viewfinder a second image was snapped. No apparition was seen in the second photo.

Interestingly this cave lies below what is known as "Dead Man's Bridge". In the 1960's it is said that a man hung himself off of the bridge. Is this his ghost? Or is it the spirit of someone who died in an outbreak at the hospital around the turn of the 20th Century? Also of note: Around the time the photo was taken a fine mist was seen hanging over two young saplings near the cave and no where else. I have included a photo of the original with an enhancement of the apparition in the lower right corner of the photo.