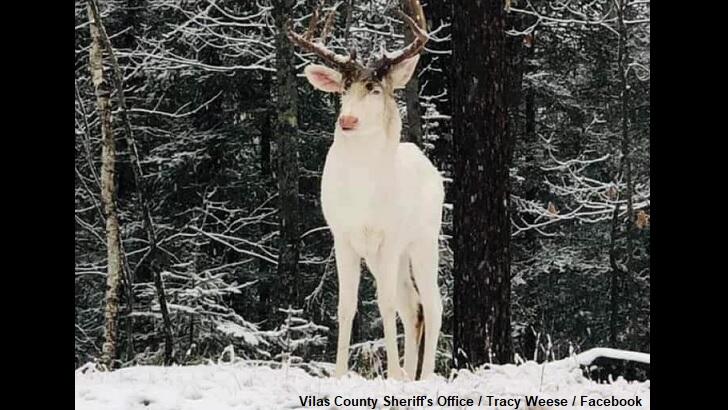 A Wisconsin woman snapped an amazing photograph of a wondrous creature that was spotted wandering through her backyard: a rare albino buck. According to a local media report, Tracy Weese had previously seen the breathtaking deer outside her home and, this past Sunday, finally managed to capture it on film when it returned to the yard of her residence in the community of Boulder Junction. Posting a photo of the creature to Facebook, she declared that "His Majesty just strolled through our backyard."

Her picture of the amazing animal was subsequently shared by the Vilas County Sheriff's Office, who marveled that the "majestic creature" was "an incredible sight to see." Having witnessed the buck a few times, Weese stressed that it is albino and not piebald, noting that the slight coloring on its head appears to be a stain created when it rubbed its antlers up against a tree. Although deer hunting season in Wisconsin is set to begin in a few days, the unique creature should be safe since shooting an albino buck is illegal in the state.