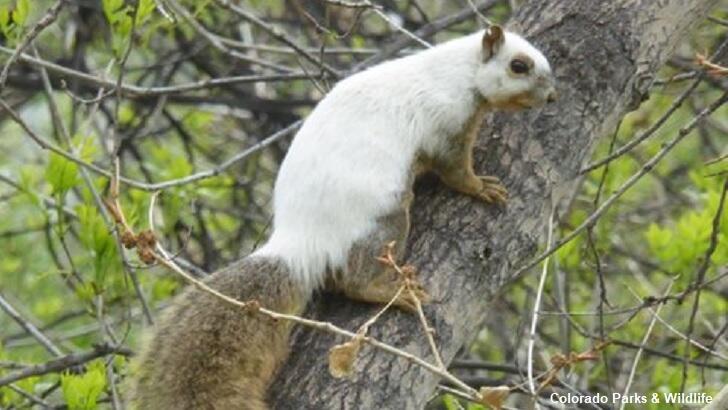 An incredibly rare and rather jaw-dropping piebald squirrel was recently spotted scampering along a tree in Colorado. Images of the wondrous creature, which can be seen below, were shared online by the state's Parks and Wildlife Department Twitter account on Wednesday morning. The squirrel's appearance, they explained, is the result of a "a genetic mutation causing varying amounts of white hair. Some can be almost pure white while others carry just patches of white."

In this particular instance, the double-take-inducing squirrel, which the department says was photographed by resident Jerry Baines at an unnamed location west of Denver, sports a coat of vibrant white fur on its back which contrasts with brown and gray coloring on its underside and tail. While it is uncertain exactly how rare such a creature might be, wildlife experts estimate that one-in-100,000 squirrels are born with a similar condition, albinism, which suggests that spotting a piebald version of the creature in the wild is equally if not more unlikely.