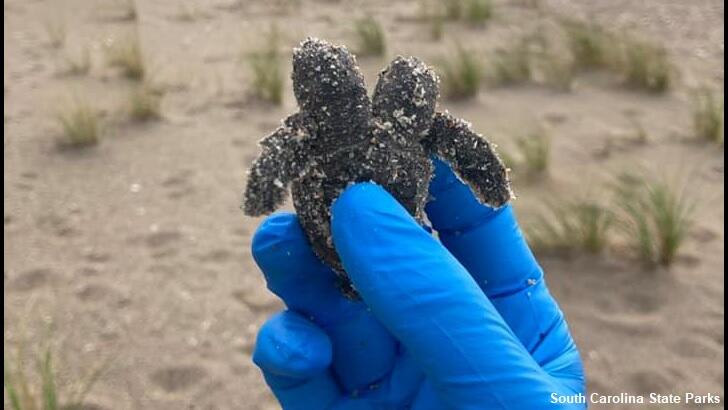 A rather rare two-headed sea turtle was recently discovered on a beach in South Carolina. The remarkable creature was found by a special 'sea turtle patrol' team of workers and volunteers from the state's parks department. Having heard of activity emanating from a nest on Edisto Beach, the group visited the location to investigate the matter as this is usually a sign of newly hatched turtles. Detailing the process in a Facebook post, the parks department explained that "we dig down to determine the success of the nest by counting the hatched eggs, unhatched eggs and on occasions also find live hatchlings." In this instance, the otherwise routine inventory wound up leading to a quite wondrous discovery.

As the team carefully combed through the sea turtle nest, they observed that there were three creatures that appeared to have recently hatched. However, the department marveled, "one hatchling in particular stood out because it had two heads!" Indicating that the creature's condition was brought about by a genetic mutation, they noted that while such turtles have been found on South Carolina beaches on a few occasions in the past, this was the first time one was discovered in that specific location. After documenting the odd find, the 'sea turtle patrol' subsequently released the two-headed turtle into the ocean, which seems like something of a cruel fate, since it will undoubtedly find living in the wild to be a challenge.