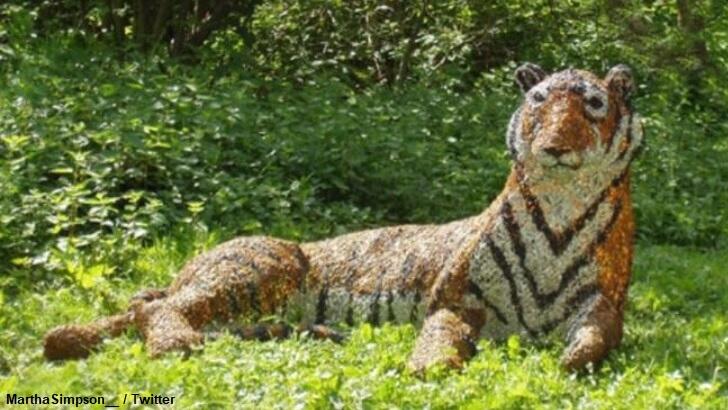 A perceived big cat sighting in England that led to an armed police response wound up having an amusing resolution when it was discovered that the 'beast' was, in fact, a realistic statue of a tiger. The bizarre incident reportedly occurred this past weekend when someone in the village of Underriver phoned the authorities to report seeing what appeared to be a massive feline lurking in a field. In anticipation of encountering a ferocious big cat, the local police department assembled a group of ten officers to respond to the call and even enlisted the help of a helicopter to locate the creature.

However, what would have been a tense search for the tiger quickly turned into more of farce when the group of armed police officers arrived on the scene and learned that the creature in question was just a fairly lifelike statue. Amazingly, the piece was actually crafted twenty years ago by artist Juliet Simpson, who had placed it near a footpath on her property long ago. Suffice it to say, the sculptor was quite surprised when she spotted the posse of police looking for the 'animal.'

Fortunately, the officers and Simpson had a sense of humor about the entire odd affair. "Out of the field opposite came a whole crowd of armed police, who by then knew that it was all a false alarm," she recalled, "and I said 'would they like to be introduced to my real live tiger?'" The sculptor subsequently brought them to the statue where they took pictures with the piece and had a few laughs. As for what might have prompted the initial report from the concerned resident, authorities speculated that perhaps the popularity of the series Tiger King caused someone to think they were seeing a genuine big cat.