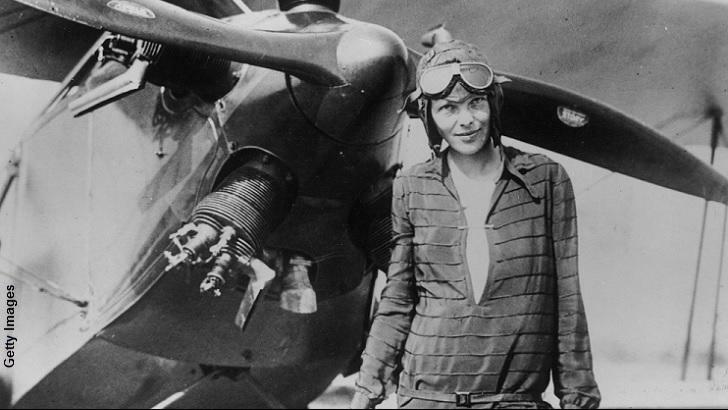 By way of a bureaucratic dispute surrounding a dive planned at the possible final resting place of Amelia Earhart's aircraft, it has seemingly been revealed that human remains were found in the downed plane. The intriguing turn of events reportedly came to light last week when a government official of the island near Papa New Guinea where the wreckage is believed to be located abruptly ordered the cancellation of an expedition to the site that was set to occur this past Sunday.

In announcing his decision, the politician accused the group behind the dive of eschewing local workers in favor of outside help and argued that their funds should be going towards the community where the downed plane is supposedly located. In order to permit further expeditions at the site, he called for greater transparency as to where the money is being spent and then added a rather curious detail that may raise some eyebrows: "they must also provide DNA results of hair and bone fragments taken from the wreck."

The politician's demand is particularly puzzling because this would seem to be the first indication that such biological materials had been recovered from the purported crash site. A subsequent response from local residents compounded the confusion as they protested the cancellation of the dive and, in response, appeared to confirm the existence of these remains, yet the left their nature somewhat mysterious. According to a committee tasked with working with the expedition group, hair and bones were indeed found in the downed aircraft, but they claimed that researchers were unable to decipher their exact origin because the materials purportedly date back to 1937 which is, of course, when Earhart disappeared.

While one wonders how experts know that the remains are that old, but cannot specifically connect them to Earhart or her navigator Fred Noonan, it could explain why the organization backing the dive did not announce what would be a fairly fantastic find. That said, there's also the chance that the politician may have heard rumors of the hair and the bones being discovered and inadvertently let slip something that they wanted to keep under wraps until further testing could be done. Although that's an optimistic possibility, it's one that can't be ruled out just yet, since Sunday's dive was supposed to be the final visit to the wreckage and would presumably have been followed by some kind of ultimate assessment of the situation.