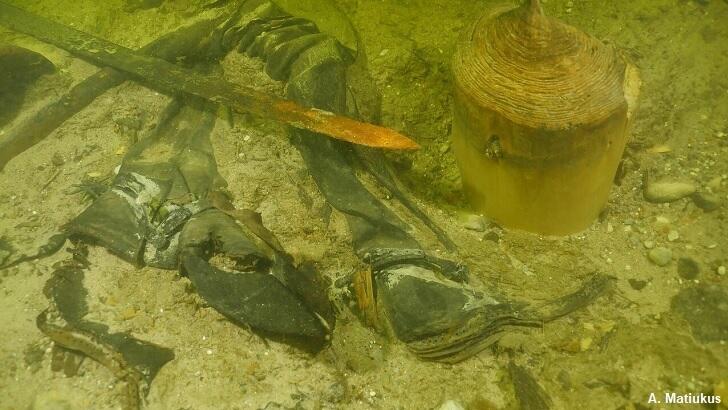 Remains of Medieval Soldier Found at Bottom of Lake in Lithuania

A survey of the bottom of a lake in Lithuania led to the surprising discovery of a Medieval soldier's remains. The body, believed to be from the 16th century, was reportedly found by divers working with archaeologists at the country's Lake Asveja, where work is being done to refurbish the submerged portions of an 86-year-old wooden bridge. While looking for potential trouble spots which may hinder the project, the team stumbled upon a strange skeleton sitting in the silt at a depth of about 30 feet.

Examining the area around the remains, which were still clad in a leather belt and boots, they discovered a sword and two knives, indicating that the individual had been a soldier. A study of the skeleton by forensic experts determined that it was that of a man from the 16th century, however the nature of his death has yet to be determined. That said, archaeologists postulate that the soldier was not purposely buried at the bottom of the lake, suggesting that he either fell and drowned or his body was tossed into the water from a previous bridge which spanned the site by some nefarious individual.