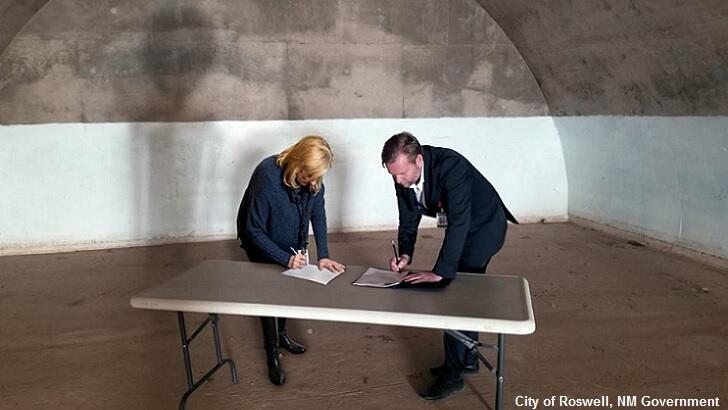 In a rather fitting alliance between two locations synonymous with the strange and unusual, the international airports in Roswell and Denver have announced the formation of a 'supernatural sisterhood.' The odd agreement, announced via a press release, will see the two facilities work together to promote their respective sites and exchange ideas regarding best practices when it comes to making air travel easier for everyone. In keeping with the reputation of the two locations as well as the Denver airport's recent embrace of its place in conspiracy theory lore, the announcement of the partnership included a wildly-amusing 'Memorandum of Understanding' that is rife with in-jokes and paranormal references.

Fashioned to look like a 'classified' document, the memorandum indicates that the two airports will be sharing "best cover-up practices," while "maintaining strict confidentiality especially regarding underground affairs." In a nod to Roswell's role in UFO history, the announcement also notes that the two sites will cooperate when it comes to communications received from "cosmic visitors" as well as how to properly manage and store "flying aircraft or vessels." And, although the agreement states that the two airports will not share their "darkest secrets," it does concede that such insights will be exchanged if ordered by a "superior species."

In a testament to how committed the airports were to the bit, they also state that, should one party wish to cancel the agreement, they were required to do so no less than one month "prior to the apocalypse" and that the agreement cannot be transferred to any "non-human third party." The two sites even went so far as to stage a signing of the resolution in an empty bunker (seen above) and the mayor of Roswell even issued a video announcement about the new partnership in a manner similar to how one imagines the revelation that UFOs are real might unfold someday.