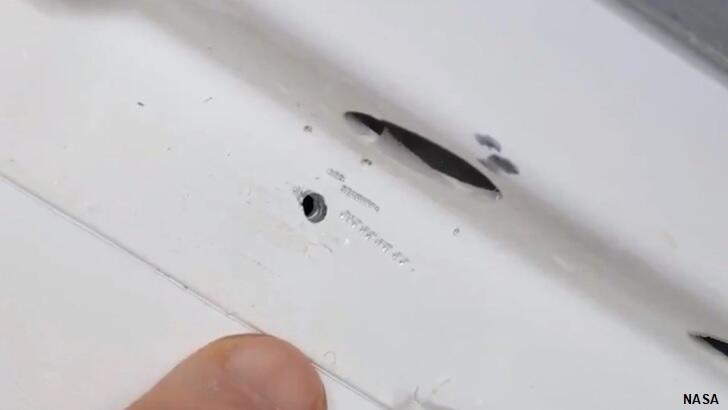 The strange case of a mysterious hole discovered in a Soyuz capsule attached to the International Space Station back in 2018 has taken a troubling turn as an official with the Russian space agency now says that the damage was intentionally caused by an American astronaut. The bold accusation reportedly came by way of an article from the Russian news agency TASS. In the piece, an anonymous "high ranking" official with the Russian space agency put forward a rather elaborate scenario for how the curious hole, which measured approximately 2 millimeters in diameter, in the Soyuz capsule came to be and pointed the finger at American astronaut Serena Auñón-Chancello as the alleged culprit.

The unnamed Russian source claims that, which serving about the ISS, the astronaut suffered from a blood clot in her jugular vein. This condition, they assert, caused Auñón-Chancello to have "an acute psychological crisis" wherein she tried to damage the Soyuz capsule in a manner that would facilitate her early return to Earth. How, exactly, such an audacious plan would have worked goes unsaid, though the Russian official did note a number of curious elements about the incident which led to the space agency's surprising conclusion that the creation of the hole was a proverbial inside job.

Specifically, they raised suspicions about the fact that a video camera monitoring the area had stopped working, that NASA refused to perform polygraph exams on the astronauts who were aboard the ISS when the damage was done, and that the evidence suggests that the hole was created by someone inside the capsule operating in a weightless environment, meaning it had to have been made by someone in space at the time. As one might imagine, NASA is not buying the conspiracy theory offered by the Russian space agency official and strongly pushed back against the accusation.

When asked about the claims during a media event on Friday, NASA's human spaceflight chief Kathy Lueders reportedly remarked that Auñón-Chancello "is an extremely well-respected crew member who has served her country and made invaluable contributions to the agency. We stand behind Serena and her professional conduct and I did not find this accusation credible." These words were echoed by NASA administrator Bill Nelson, who declared that "I fully support Serena and I will always stand behind our astronauts." The dispute will undoubtedly increase tension between the two space agencies which may be headed towards a dissolution of their working relationship sometime in the not-too-distant future should Russia go ahead with plans to abandon the ISS.