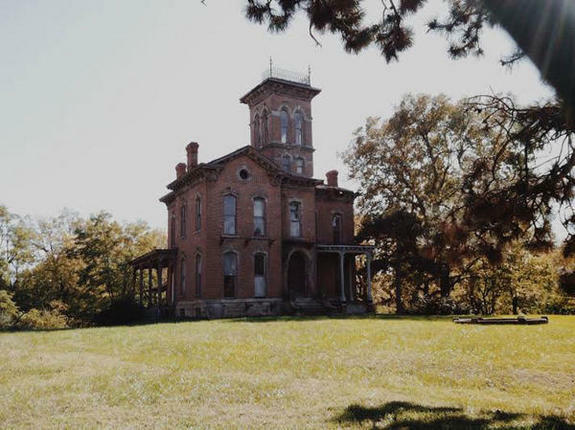 Built in 1871 and located along the Shawnee Indian trail in Kansas City, KS, the Sauer Castle served as the residence for businessman Anton Sauer. Sauer relocated his family from New York City to Kansas City in the late 1860s following the death of his first wife, Francesca. Several members of the Sauer family died in the house, including Anton himself, as well as his second wife Mary, who committed suicide by hanging, and several children. Five generations of the Sauer family lived in the mansion until it was eventually purchased by the owner of a home heating oil company (who also died in the house).

For years ghost stories have surrounded the mysterious house, which is privately owned today and not open to the public. Legend says the house is guarded by dogs and an armed groundskeeper (neither of which were seen on my visit on Sunday, October 19, 2014). In 1977 it was added to the National Register of Historic Places, and 1987 it was listed as a Kansas City, KS Historic Landmark. The castle sits atop a hill overlooking the Missouri River in a residential neighborhood and appears to be undergoing renovations as part of the Family Trust Restoration Project.