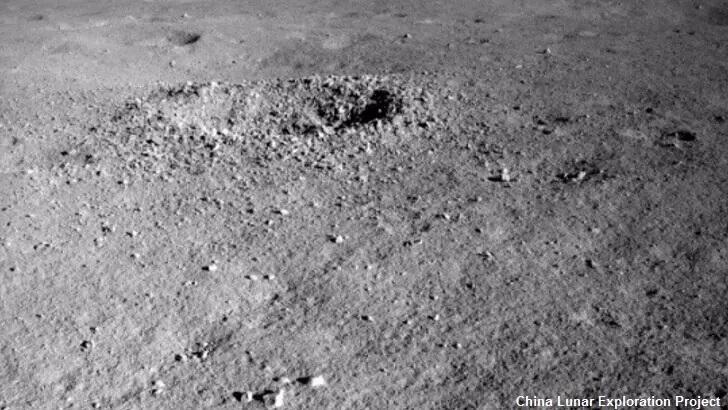 Scientists Identify 'Mystery Substance' Found on Far Side of the Moon

A puzzling substance found on the far side of the moon by China's Yutu-2 rover last year has finally been identified. The curious green material was spotted by the space craft back in July of 2019 and news of its discovery raised eyebrows among scientists when it was described by a Chinese media outlet as resembling "a gel with a mysterious luster." Given the enigmatic nature of the proverbial 'dark side' of the moon where it was found, the odd substance understandably spawned speculation among paranormal enthusiasts that perhaps it was somehow alien in nature.

Alas, much like many a lunar anomaly which appears fantastic at first, a closer examination of the material has reportedly determined that it is merely a rock. In a newly published paper, Chinese scientists explained that an analysis of the material using a spectrometer aboard the Yutu-2 indicated that the substance was breccia, which is a type of rock consisting of various mineral fragments fused together from extreme heat. Such substances are usually formed by way of volcanic activity or an asteroid strike, with the latter scenario being the more likely of the two.

Although the scientists behind the study conceded that they cannot be absolutely certain of their findings, researchers who have looked at the research appear confident in the conclusion, especially since the substance seemed to match similar lunar samples of breccia that were taken back to Earth by the Apollo astronauts. They also note that the resolution to the mystery is enlightening in the sense that it would appear to indicate that the largely unexplored far side of the moon is apparently fairly similar to the lunar regions that have been previously explored.