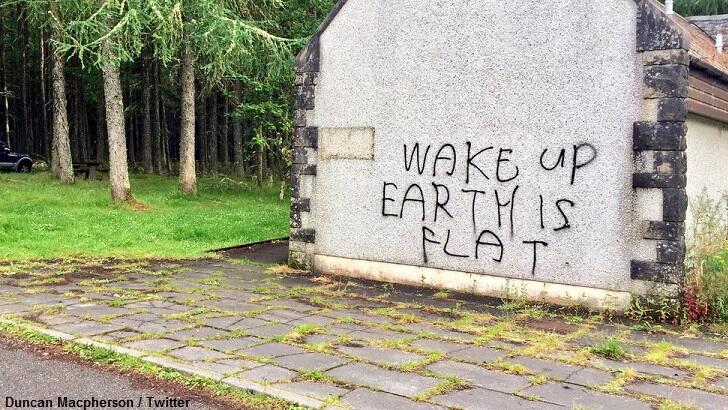 With more sites in Scotland being tagged with graffiti promoting the Flat Earth theory, one government official is calling for a crackdown on the vandalizing conspiracy theorists.

Initially appearing last month on signs along Scotland's A9 highway, the crudely-scrawled messages exhorting observers to "Research Flat Earth" have begun spreading to other parts of the country.

The ill-conceived calls to action were recently spotted on the sides of a number of buildings in the city of Inverness, which has drawn the ire of a local politician.

"If we allow this vandal to get away with it, then it could just be the start," councilor Duncan Macpherson lamented to the Inverness Courier newspaper.

Macpherson's concerns appear to be warranted as the graffiti has been reported at sites covering a wide of Scotland spanning over 100 miles.

This suggests that the campaign is either the work of one highly dedicated Flat Earth fan or, more worrisome, that it is becoming an unfortunate fad, of sorts, to spray paint the slogans throughout the country.

Regardless of the source, Macpherson simply wants it to stop and is pressuring police to more thoroughly investigate the matter.

"We need to find out who is doing this and nip it in the bud before it becomes a bigger issue," he declared to the newspaper.

While some in the Flat Earth community may celebrate the unorthodox and illegal campaign, serious researchers who subscribe to the conspiracy theory would be wise to repudiate the vandalism.

In contrast to the clever concept of purchasing billboards to promote Flat Earth research, as seen in the United States, the graffiti campaign sweeping across Scotland serves to only further malign the already marginalized conspiracy theory to the general public.

If the community of advocates for the unorthodox idea wish to be taken seriously, as they so often demand, scribbling "Research Flat Earth" is not the way to accomplish that goal and, in fact, has the opposite effect.

Disappointed to see vandalism & graffiti on the former Tourist Information Centre at Daviot Woods, by A9 dual carriageway in Inverness South pic.twitter.com/3rqsQrPsuD