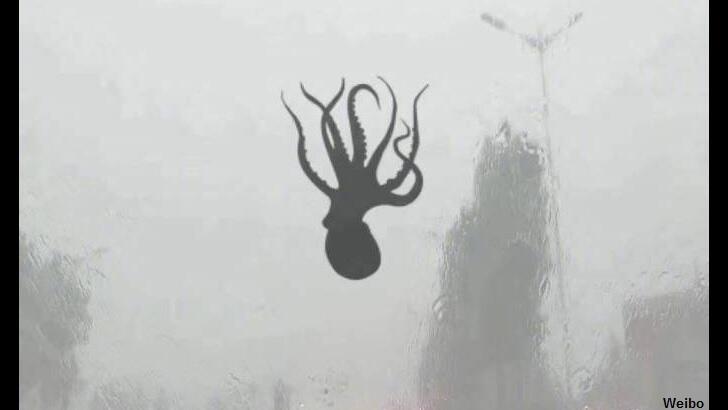 A ferocious storm that swept over a coastal city in China spawned conditions which caused sea creatures to rain down from the sky! The incredible phenomenon occurred in Qingdao earlier this week when winds and rain combined to flood the city and generally wreak havoc on the area. As residents were riding out the storm, they were stunned to see some proverbial visitors to the city in the form of various denizens of the deep that had been suddenly deposited onto cars and sidewalks from the sky.

Photos of the odd rainfall spread like wildfire on Chinese social media with perhaps the most iconic image being that of an octopus hurtling through the air as if it were floating in space. Other creatures caught up in the chaos were starfish and shrimp which found their way onto a number of windshields throughout the city. To those watching the weirdness safely from home, it was no doubt a wild sight, but we're guessing that those living in the city weren't as thrilled with what was going on, considering most of them were wading through knee-deep water during the treacherous weather event.

The strange case of 'fishfall' in China should sound familiar to fans of Forteana or anyone who has seen the film Magnolia as such events have been frequently documented by those chronicling the strange and unusual in the past. In fact, a similar event took place here in the United States just last year when an elementary school in California was pelted with fish that also came from the clouds. So it's probably safe to say that the soaring seafood is not a sign of the End Times.