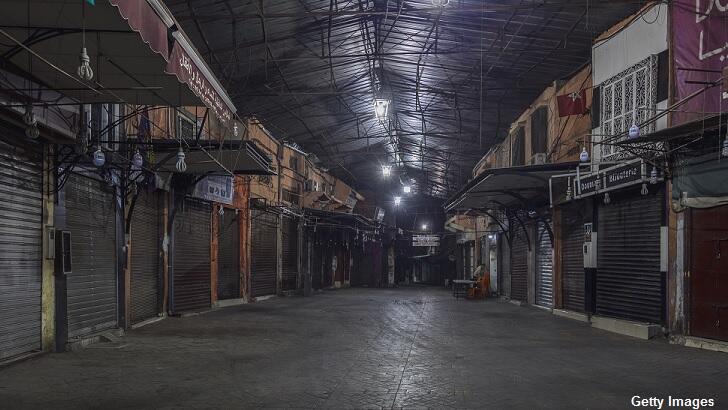 In a puzzling story out of Pakistan, workers at a major outdoor market are on edge following reports of a 'supernatural creature' spotted by security guards. According to a local media source, the strangeness began around a week ago when a night watchman named Gulzar was patrolling the grounds of the Shershah Kabari Market in the city of Karachi. Hearing some dogs making a ruckus near one of the site's warehouses, the guard headed over to the area to investigate and encountered some kind of mysterious beast.

"The creature was black and its eyes were as bright as a torchlight," recalled the shaken security guard, who marveled that "I have never seen anything like that before" in his 25 years on the job. Alas, Gulzar's attempts to tell his colleagues about the run-in with the eerie interloper fell on deaf ears as they dismissed his tale as a work of fiction. Fortunately, it did not take too long for the guard to be vindicated as a second worker stumbled upon the beast while on patrol the following night.

As is often the case, the reports from the two guards quickly let to all manner of rumor and speculation to spread throughout the market to the point that it's quite difficult to discern what exactly may be lingering in the area. Word on the street in Karachi is that the beast is five feet tall and can leap up to 20 feet in the air. The creature is also being blamed for the mysterious death of 11 goats at the market, which has led some to suspect that perhaps it is a chupacabras.

Not everyone is on board with the idea that the market is being visited by a dangerous creature from out of this world as one worker at the location dismissed the whole affair as the work of pranksters. Be that as it may, it seems that a fair number of traders are taking the matter seriously and have begun closing their shops early for fear of falling victim to the beast when the darkness of night arrives. Others have even gone so far as to report the weirdness to the local police, who say that they have heard reports of the mystery creature and plan to investigate the situation.