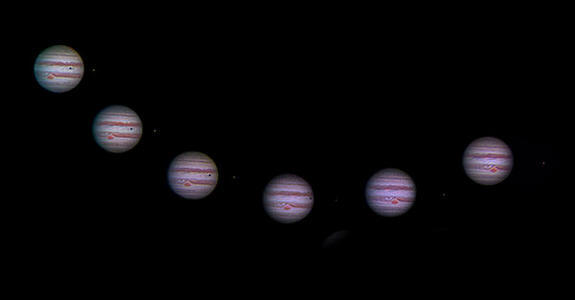 I wanted to capture a sequence of images showing Jupiter's fast rotation. The night of April 18th, 2015 was clear and the air mass was relatively stable so I spent the evening in my backyard with my telescope imaging the planet. This composite consists of 6 images taken over a space of a little over an hour. The first three images were taken roughly 6 to 8 minutes apart...To obtain these images, I used an ASI120mm web-cam designed for astrophotography. This camera was attached to an LRGB filter wheel which in turn was attached to a Powermate 4x image amplifier attached to an Explore Scientific 127mm (5") refractor telescope. The ASI 120mm is a monochrome camera so I had to shoot 4 separate .avi sequences...

Jupiter rotates at approximately 28,000 mph, faster than any other planet in our solar system. You can see how far the Great Red Spot (GRS) travels in just over an hour. The one moon, possibly Io, remains visible throughout while appearing to move further away from Jupiter with each successive image but the shadow has rotated off the face of the planet by the fifth image.