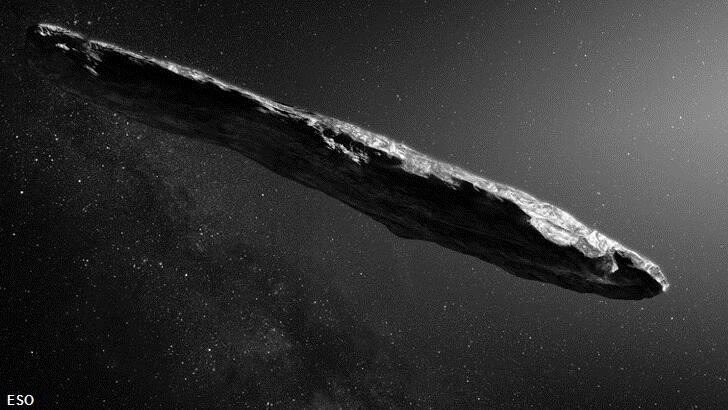 SETI Project Plans to Give Interstellar Asteroid a 'Listen'

An ambitious project aimed at searching for signs of ET life is turning its attention to the odd interstellar asteroid known as 'Oumuamua.

Discovered earlier this year, the curious find was hailed as the first object to have entered into our solar system from somewhere else in space.

Along with sparking the imagination of UFO enthusiasts, 'Oumuamua's unique origin story also apparently caught the attention of astronomers with the Breakthrough Listen project.

The SETI endeavor backed by a Russian billionaire has announced plans to 'listen' to the historic asteroid starting this coming Wednesday in an attempt to see if they can detect radio signals emanating from it.

In a rather remarkable email, reported by The Atlantic, the head of Harvard's astronomy department who serves as an advisor to the project made an observation that is likely to send ET fans' hearts souring.

"The more I study this object, the more unusual it appears," professor Avi Loeb wrote, "making me wonder whether it might be an artificially made probe which was sent by an alien civilization."

The collective curiosity of the team at Breakthrough Listen when it comes to 'Oumuamua led them to reserve space at the telescope in West Virginia in order to see if they could spot some kind of signal from the asteroid.

Fortunately, the asteroid is still close enough to Earth that astronomers ought to be able to pick something up fairly quickly if such a sign of ET origin for 'Oumuamua exists.

However, it does present something of a weird sci-fi-film-worthy problem should they be successful, since 'Oumuamua is actually headed away from the Earth.

Since humans are yet to possess the technology to send a probe out to examine 'Oumuamua, we very well could find evidence for ETs that is quickly disappearing before our eyes.

More grounded members of the mainstream science community say that it's unlikely that we'll be faced with such an issue, since 'Oumuamua is probably only an interesting asteroid and not something ET-made.

Nonetheless, the fact that serious astronomers deem it worthy of checking is a testament to how times have changed when it comes to the quest to find aliens, since someone suggesting such an idea in the past would have been dismissed as merely a 'UFO buff.'