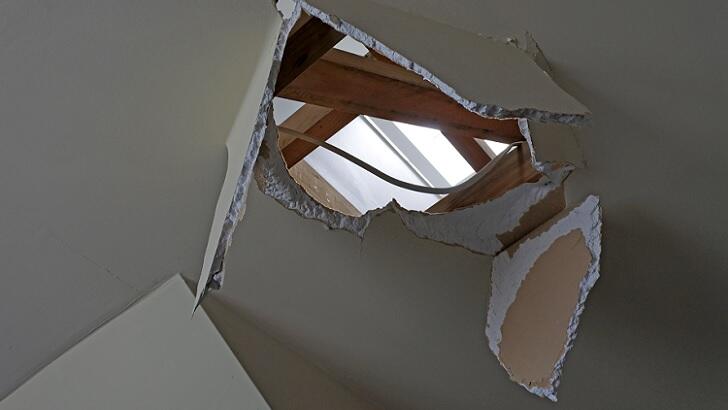 Sleeping Woman Nearly Hit by Meteorite That Crashed Through Her Roof

A Canadian woman got quite the scare when she was suddenly roused from her slumber by a thunderous sound and subsequently discovered that she had narrowly missed being struck by a meteorite that had crashed through her roof and landed on her bed. The very strange incident reportedly occurred in the town of Golden, British Columbia as Ruth Hamilton was sleeping earlier this month. Her peaceful rest was unceremoniously pierced in the middle of the night, however, when she heard an enormous crash and felt a peculiar dust-like material cover her face. "I just jumped up and turned on the light," she recalled, "I couldn't figure out what the heck had happened."

Looking around her bedroom, Hamilton noticed that there was a rather sizeable rock on her pillow and, above the bed, a fairly large hole in the roof (which can be seen below). Understandably perplexed and more than a little unsettled by the weirdness that had woken her up, she proceeded to phone the police to report the perplexing situation. Upon their arrival, cops quickly determined that a meteorite had crashed through her bedroom ceiling, which actually provided some comfort to Hamilton. "I was shaking and scared when it happened, I thought someone had jumped in or it was a gun or something," she said," it's almost a relief when we realized it could only have fallen out of the sky."

With the literal dust having settled from the odd evening, Hamilton expressed amazement at the remarkable turn of events, marveling that the meteorite was "a star that came out of the sky, it’s maybe billions of years old." The fact that the incoming object only narrowly missed her head while she was asleep was not lost on her as she mused that the fortuitous nature of the incident was a reminder that "life is precious and it could be gone at any moment even when you think you are safe and secure in your bed." While she may be thanking her lucky stars that the meteorite just barely missed hitting her, Hamilton is still waiting to see if her good fortune will extend to her insurance company as they are uncertain if they cover falling space debris.