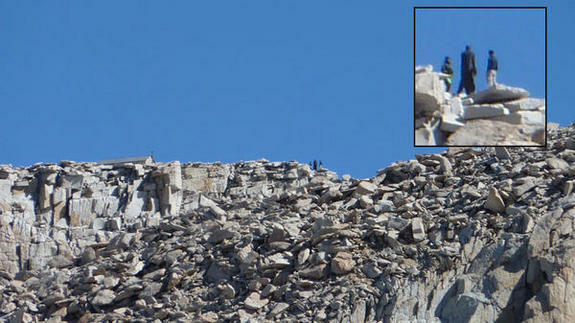 While doing a one-day climb of Mt. Whitney on the 4th of July, 2010, my friends and I stopped to catch our breath just below Mt. Whitney’s summit. We were excited to be so close to the summit after starting our climb at 3am and we could see other people at the top from where we stopped, so I took a few pictures from where we were. You can clearly see 3 figures on the ridgeline in the picture, but if you zoom in [inset on the right], it becomes obvious that the center figure (in all black) seems much taller than the other two. Since these people were already at the top, there is no way that we would not have encountered these people, either on the trail when they were heading down and we continued up, or at the summit itself. No one in our group recalls seeing anyone that fit the figure in black’s description (very tall, thin and dressed all in black). Just about everyone we passed wore colorful, activity appropriate clothes, not to mention all the American flags people (ourselves included) were carrying since it was a beautiful 4th of July day!

One possibility is that whoever this was, descended via one of the “mountaineering” routes that basically takes you down over the edge instead of the main trail. More than likely, it’s nothing unusual. It’s possible someone out there will know who this was and think I’m an idiot, but you can easily let your imagination convince you otherwise. Slenderman maybe…? Regardless, I know of nobody dying on Mt. Whitney that day or of any other strange happenings. It ended up being a perfect day and an awesome hike. Don’t let the idea of Slenderman waiting for you at the top keep you from doing this hike. Anyone that’s physically able and enjoys hiking should make it a point to do this hike at least once in their lives!