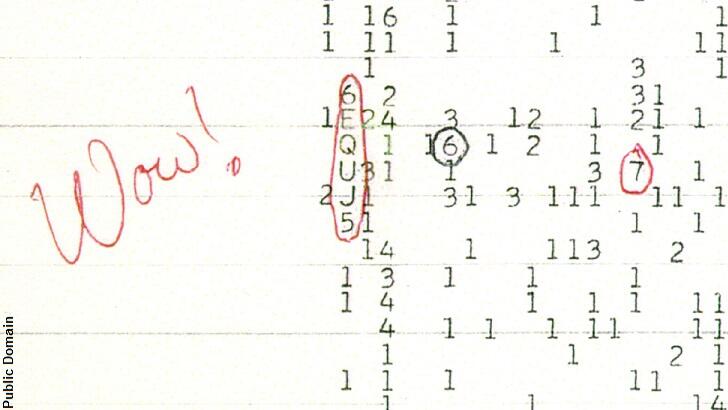 Source of the 'Wow!' Signal Found?

As we approach the 40th anniversary of the legendary 'Wow!' signal, a new study appears to have finally determined its origin.

The puzzling radio signal has vexed scientists after it was noticed in August of 1977 by a radio astronomer, who noted its anomalous nature by scribbling the word 'Wow!' next to it in his notes.

Since that time, researchers have attempted to decipher the source of the signal, but continually fell short when it came to solving the mystery.

However, a newly-published, peer-reviewed paper by astronomer Antonio Paris may close the case for good.

Last year, Paris proposed the hypothesis that the signal emanated from a comet, which was not discovered until 2006, that had been passing through the area observed by the radio telescope.

Paris' organization, the Center for Planetary Science, subsequently began testing the theory in late 2016 and early 2017 by observing the comet in question.

The exhaustive study found that, indeed, the comet emitted a frequency which matched the vaunted 'wow' signal and that no other possible sources around the celestial body could have otherwise accounted for it.

Intriguingly, the project also looked at three other random comets and found that they also emitted the 'wow' frequency.

As such, the paper concludes that the enigmatic signal was, in fact, the result of a natural phenomenon that just happened to occur in the right place at the right time and not an extraterrestrial message.

Having passed the rigors of peer review, it seems that Paris' conclusions are solid and, unless an alternative theory is proposed that can upend his research, the 'Wow!' signal mystery may be history.

While the findings are sure to disappoint UFO enthusiasts, at least we can rest easy knowing that Earth did not miss a call from ETs after all.

Source: The Center for Planetary Science