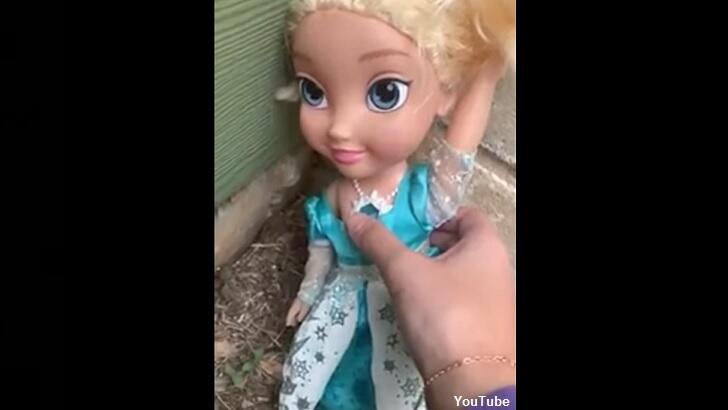 Opening themselves up to an endless amount of 'Let It Go' jokes, a family in Houston says that they were stuck with a spooky Elsa doll that kept mysteriously reappearing at their house when they tried to throw it away. The very strange saga reportedly began back in December of 2013 when Emily Madonia's daughter received the talking Frozen princess toy for Christmas. Two years later, they were left scratching their heads when the phrases uttered by the doll suddenly and inexplicably began alternating between Spanish and English, even though there was no button on the toy to make such an effect happen.

Despite the toy's puzzling bilingual transformation, the family held onto the doll until a few weeks ago when they decided that it was time to, yes, let it go. However, that's when things took a rather weird turn as their first attempt to throw it away saw the doll somehow wind up back in their home inside of a bench. "The kids insisted they didn’t put it there," Madonia told a local TV station, "and I believed them because they wouldn't have dug through the garbage outside." Adding yet another bizarre layer onto the story, as can be seen in the video below, the doll now only spoke Spanish.

Determined to unload the doll once and for all, Madonia's husband proceeded to double bag the toy and left it at the bottom of their garbage can. Although they saw that their trash and, presumably, the doll was taken away when garbage was collected that week, the family was bewildered when their daughter later discovered the toy leaning up against their house. At this point, Madonia took to Facebook to share the unsettling story and pleaded "help us get rid of this haunted doll."

As one can imagine, the family has considered the possibility that they are the victim of some kind of trickery, but noted that markings on the doll indicate that it's the same toy that they tried to throw out in the first place. "Most logical thinkers believe it's a prank," Madonia said, "but I don’t understand how or when it was done, especially because the garbage truck had taken it away." They ultimately took some rather drastic measures to put an end to the 'haunting,' as they actually went so far as to mail the doll to a family friend in Minnesota where it remains ... for now. "If the doll comes back," Madonia mused, "I might have to open my mind to some of the more supernatural solutions."

Adam Wingard, director of the new "Godzilla vs. Kong" film joined Ian Punnett (Twitter) last month. There was so much to discuss that they didn't have time to venture into Adam's paranormal stories. So, Adam rejoins Ian to tell those tales....