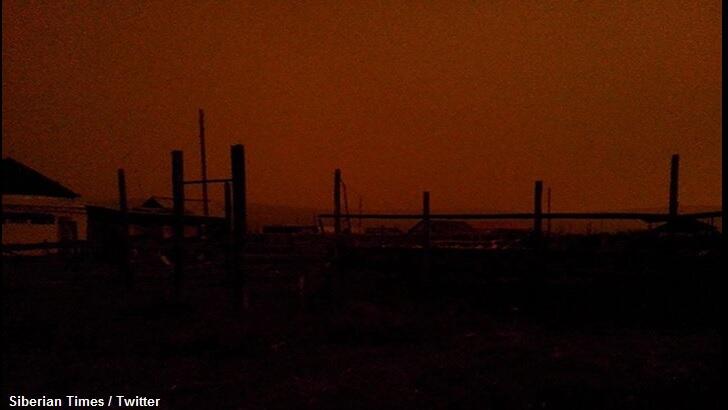 Residents of a large region of Siberia were baffled on Friday when an inexplicable darkness fell over the area and lasted for hours. According to local media reports, the strangeness started late in the morning when the skies over parts of the Russian republic of Yakutia suddenly turned dark and then stayed that way for a whopping three hours. Frightened residents were forced to wield flashlights in order to move around safely outside and largely retreated to their homes because it felt "as if something heavy in the air was pressing on your chest."

Following the odd event, bewildered residents ventured outside and reportedly found that a layer of dust had covered everything. Meanwhile, water in both uncovered barrels and lakes had turned dark and murky. This led many to conclude that the eclipse-like incident was, in fact, caused by smoke coming from wildfires raging in a nearby area. However, not everyone is convinced of this explanation, especially after one area official disputed the discovery of dust and insisted that "many witnesses can confirm" that they saw no such thing.

As one can imagine, the area once plunged into darkness, said to be the size of Italy, now finds itself shrouded in confusion as no one is quite sure what was behind the weird event. Not unlike here in America, speculation on social media has turned to some fantastic possibilities. "Messages are going around about a light flash registered by the US satellites," one resident said, "followed by increase of radioactive level and unusual activity of the military." And another individual offered the rather imaginative musing that "this can only be explained by a UFO."