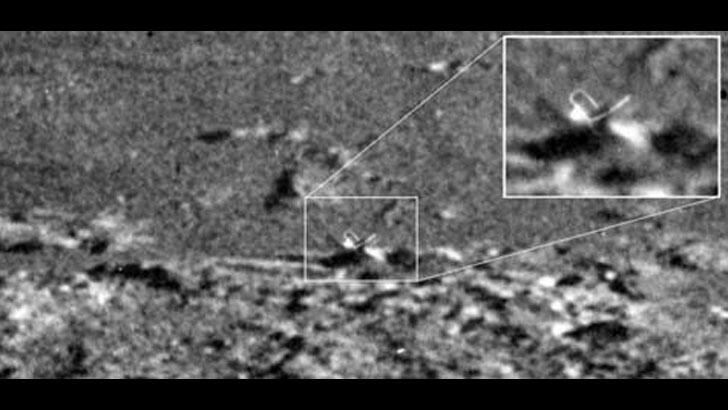 In the 6/30/16 show, Linda Moulton Howe reports that Donna Hare, a former Philco Ford and NASA Photo Lab tech, identified this strange object as the same photograph she saw, after the May 18 to May 26, 1969, Apollo Mission 10-- NASA Frame No. AS10-32-4822. Donna says she watched a female NASA employee in Building 8, NASA Manned Space Center in Clear Lake, Texas, near Houston (later Johnson Space Center), use thick, black ink to "paint out" on a negative format of this image, the unidentified, structured object assumed to be "extraterrestrial" on the lunar surface.

Since black shows white in negatives, the assumption is that NASA thought it was easier to expand the white glows below each of the "curved bars" and thus have more white and not black. Or after the black ink was painted in over the "butterfly wings" shining light, a positive transparency was made? Graphic enlargement by Keith Laney from original print provided by retired NASA human test engineer Ken Johnston.