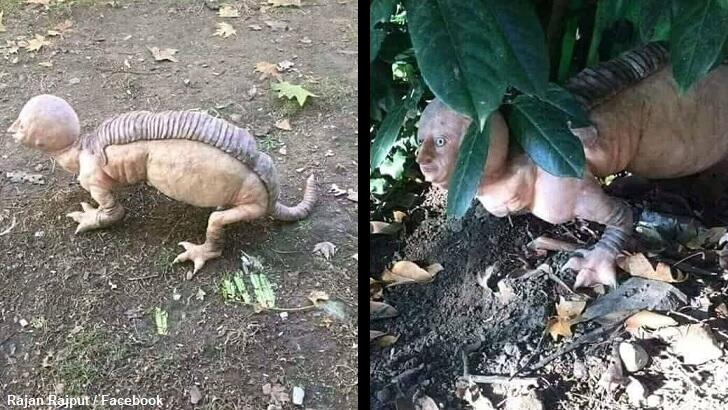 Social media users in India have been inundated with a viral warning about a mysterious and bizarre-looking creature that is actually just a really weird sculpture. The odd case of mass confusion reportedly began earlier this month when photos of the 'beast' appeared online with the ominous warning that farmers in the Indian state of Rajasthan should not go out to their fields alone because they may run afoul of "this very dangerous animal." The 'monster' in question, which is somewhat reminiscent of the legendary cryptid known as the Squonk, boasts a human face and what appears to be the hairless body of some kind of creature.

The eye-catching images of the oddity along with the ominous warning attached to them was apparently evocative enough to residents in the region where it was said to have been seen that the story was shared far and wide online in India. Fortunately, the mystery was solved in short order as it was determined that the 'creature' was, in fact, a silicone sculpture created by Italian artist Laira Maganuco, who describes the work as an 'armadillo hybrid.' Amazingly, this is not the first time that her creation was the centerpiece of a viral story as a similar 'sighting of the beast' swept across Indian social media back in 2018. How it wound up making a comeback this month is a mystery, but one can't help but admire how the sculpture managed to capture people's imagination all over again.