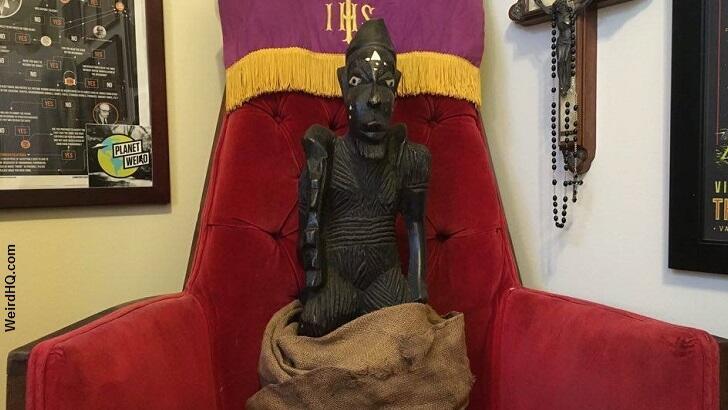 Paranormal adventurers Greg Newkirk and Dana Matthews told C2C how a strange statue, gifted to them by a listener of the program, has seemingly spawned terrifying nightmares for anyone who comes into contact with it.

Newkirk recalled that, during their last appearance on the program, the couple invited listeners to send them any odd objects which might be a good fit for their Traveling Museum of the Paranormal and Occult.

"One man in particular sent us something that has turned out to be one of the scariest objects that we've added to the museum," he marveled.

The contribution, seen above, was discovered wrapped in a burlap sack in the crawlspace of the man's home.

Almost immediately after finding the statue, an unsettling series of events befell the family, beginning with their young son having nightmares that the "little man" was pulling the covers off of his bed.

When the parents also started having graphic nightmares, including one where the husband murdered his wife, they decided to return the statue back to the crawlspace in the hopes of ending the odd experiences.

"But things only got worse," Newkirk reported, as the man began having visions of shadow people and hearing the sounds of someone rummaging through his house.

As 'luck' would have it, Newkirk said, just as the man had grown exasperated at the odd events and decided to dispose of the statue, "he heard us on Coast to Coast."

When they met to exchange the statue, the man told Newkirk, "this is your problem now. I was gonna throw it out, but you guys wanted it. You can take it."

The following day, when they decided to bring the statue to an exhibition of their Traveling Museum, the couple encountered car trouble for the first time, but a later diagnostic test showed no problems with the vehicle.

However, that was merely the prelude to the creepy experiences which were soon to follow.

According to Newkirk, he then began having vivid recurring nightmares where he was in a crowd and sensed that he was being watched. In the dreams, he'd look down and, in the distance, see a tiny man with "oily black skin and bright blue eyes" wearing a shroud similar to the burlap sack.

"I was seeing a strange humanoid personification of this statue," he said.

The odd dreams were not limited to just Newkirk, he revealed, as brave visitors to their museum who ask to hold the statue have also reported having nightmares featuring the strange idol.

"So people are actually being affected by this thing," Newkirk said with a chuckle, "and it's all thanks to one of the wonderful listeners of Coast to Coast AM."

To listen to the full interview with Greg Newkirk and Dana Matthews, click here.