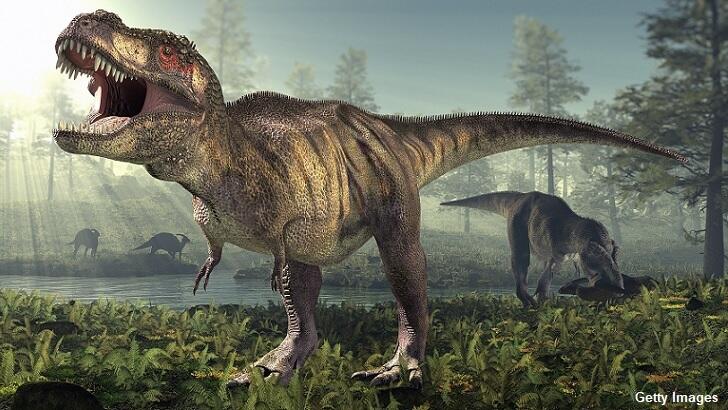 Study Suggests Billions of Tyrannosaurus Rexes Once Roamed the Earth

A fascinating new study aimed at determining what the population of Tyrannosaurus Rexes on Earth would have been in the distant past determined that approximately 2.5 billion of the creatures likely existed throughout history. The thought-provoking research, published in an academic paper on Thursday, reportedly came about when biologist Charles R. Marshall from the University of California in Berkley was examining a T. Rex fossil and found himself wondering just how rare the remains really were. In turn, he set about trying to figure out what the population of T. Rexes at any given time could have been.

To solve the curious question, Marshall and his students applied contemporary models used to determine animal populations and offered some educated guesses regarding the dinosaur's physiology and the range within North America that the creature probably lived. After plugging these possibilities into the equation, they found that the probable population of adult T. Rexes in North America at any given time would have been around 20,000. Since the dinosaurs are believed to have existed for around 2.4 million years, this would mean that approximately 2.5 billion T. Rexes once roamed the Earth.

However, Marshall told the New York Times, the 20,000 estimate actually seems somewhat low since "it just seems inconceivable you can last a couple of million years with those few individuals" as the slightest issue, such as a plague or a disaster, could wipe out the entire species. As such, he posited that the number could possibly be as high as 200,000. While the study may seem like merely a fun intellectual exercise, experts say that it provides an intriguing new avenue of exploration when it comes to the still-mysterious creatures that once called the Earth home as it sheds light on the potential dinosaur ecosystem of the distant past.