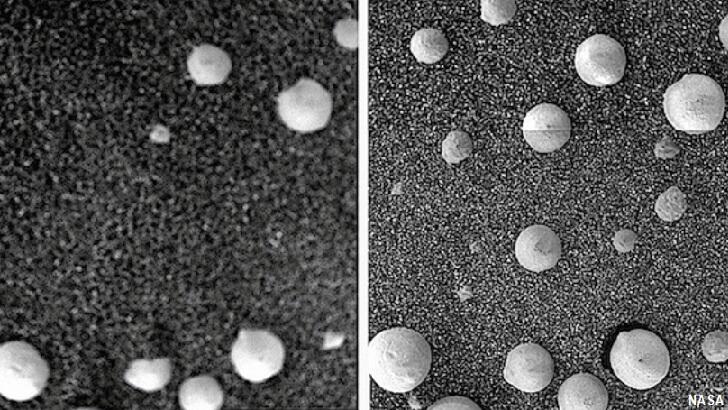 A thought-provoking new study from a team of scientists who examined images of Mars argues that the Red Planet is rife with mushrooms and other fungi that can be seen growing over the course of time. The intriguing hypothesis was laid out in a paper published this week in the journal Advances in Microbiology. The researchers behind the study looked at sequential images taken by the Opportunity Rover and the HiRISE satellite which orbits Mars and, in the process, noticed objects on the surface of Mars changing dramatically in a manner suggesting that they could be alive.

For example, as seen in the comparative image above, the team noted that in the first photo "nine spherical and semi-spherical specimens lay upon the coarse grain sand of Meridiani Planum." However, in an image taken just three days later, those original objects seem to have grown considerably and there are now 12 of the curiously shaped oddities in the same spot. Beyond the baffling spherical anomalies, the paper cites several other cases wherein it appears as if the surface of Mars sports a variety of "mold, lichens, algae, methanogens, and sulfur-reducing species." Based on their analysis, the scientists posit that the different types of fungi grow in cycles that are in keeping with the seasons on Red Planet.

If all of this sounds familiar, that's because the 'mushrooms on Mars' theory has been bandied about since around 2004, when the spherical oddities first spotted by the Mars Global Surveyor were confirmed and photographed by the Opportunity Rover. Over time, the anomalies have become something of a contentious issue as scientists at the space agency say that they are merely a mineral formation known as hematite. However, not unlike fungi itself, the Martian mushroom hypothesis has continued to pop back up by way of various 'rogue' scientific papers every few years.

As one might imagine, the mainstream astronomical community is skeptical of the idea that the Red Planet is teeming with mushrooms and other types of fungi because, they contend, the harsh conditions on Mars are not conducive to such organisms. Based on sheer array of different kinds of fungi the new paper purports to have documented, it seems that the debate is unlikely to end until a more sustained presence on the Red Planet is developed and these various anomalies can be examined in greater detail. What's your take on the 'Martian mushroom' hypothesis? Share your thoughts with us at the C2C Facebook page.