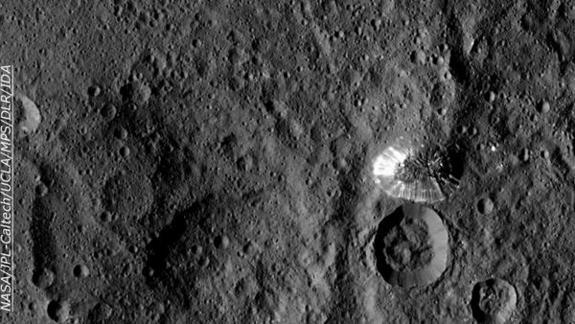 NASA’s Dawn spacecraft has transmitted a close-up look at the dwarf planet Ceres’ tall conical mountain referred to as "Lonely Mountain." "Dawn is performing flawlessly in this new orbit as it conducts its ambitious exploration,” Marc Rayman, Dawn's chief engineer and mission director said. "The spacecraft's view is now three times as sharp as in its previous mapping orbit, revealing exciting new details of this intriguing dwarf planet."

Ceres is the largest object in the asteroid belt between Mars and Jupiter. One of the small world’s biggest features is Lonely Mountain. The peak standing 4 miles high was captured by Dawn from a distance of 915 miles (1,470 kilometers). The craggy rock juts out from the Southern Hemisphere of Ceres.