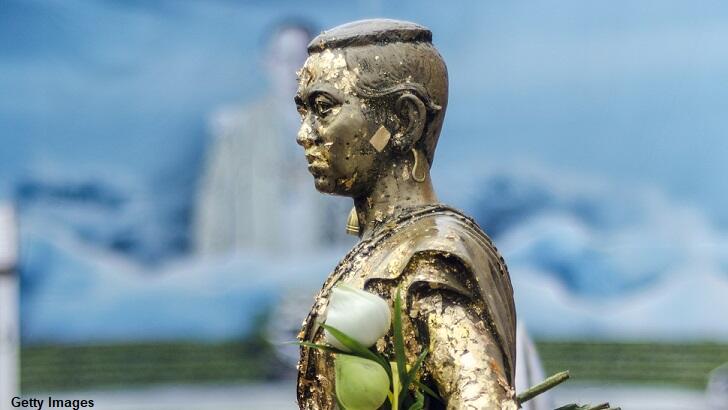 A popular paranormal television program in Thailand has been cancelled following a controversial ghost hunt in which one of the investigators dishonored a national heroine. The strange incident reportedly occurred when the team from Chong Song Phee, which translates to 'The Real Ghosts,' were visiting a temple that serves as a shrine (seen above) and final resting place for Lady Mo, a revered figure who, legend has it, saved the city's residents from a forced evacuation by invading forces in the 19th century.

During the televised ghost hunt, a purported psychic medium claimed to be in communication with Lady Mo's husband and asserted that the spirit told her that his adopted daughter, named Boonlua, had actually been his mistress. Oddly enough, the episode originally aired back in February and the alleged revelation from the 'other side' apparently did not cause much of a stir. However, for reasons unexplained, word of the ghost hunt began spreading on social media in Thailand over the last few weeks.

The simmering discontent over the episode reaching a full boil this week when several officials in Thailand decried the actions of Chong Song Phee's ghost hunters. "The show is disrespecting Lady Mo and destroying her and Lady Boonlua's virtue," declared the head of a group dedicated to preserving the heroine's memory. Meanwhile, the individual who oversees the temple dedicated to the heroine demanded that the ghost hunters apologize for their actions. The outrage was also echoed by a local government official who also lambasted the program.

"They should research the historical facts before going on air like this," Wichien Chantaranotai said, "they cannot claim something by contacting ghosts. It's not science." He went on to suggest that the city in which the temple is location may even pursue some kind of legal action against the ghost hunters as well as the television network behind Chong Song Phee. It would seem that the strong messages of condemnation were received loud and clear as the broadcaster promptly announced that they have decided to cancel the program.