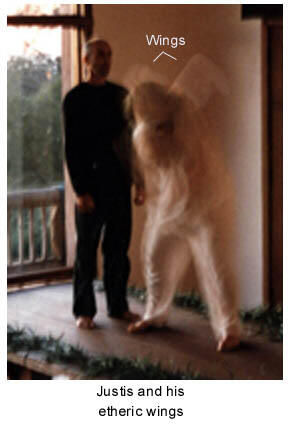 The Arrival of Men with Wings

Recently, spiritual beings in the morph started talking about the arrival on earth of men with wings. I found it intriguing but I didn't know what was meant by it. Certainly, religious paintings depict Michael the Archangel with wings, and people imagine all angels with wings. I always thought this was so because many people have had dreams in which they are flying and some have also had out-of-body experiences. So that is why the mythology arose of powerful angels and superhuman heroes that could fly, like Icarus, for example.

During twenty years of watching the etheric, the bio-electric force field round living things, I have never seen anyone with etheric wings, until recently anyway. Then at a seminar given by my friend Justis Barrymore, in Milton, Australia, one of the participants took some snap shots of a process Justis does with people, while standing on a very large dining room table.

He goes into a trance and partially dematerializes, and he then fetches out dark entities that might be lingering about. I have said before, the morph dematerializes reality, often making walls and floors appear soapy looking,and many of us while at the house at Milton have had the experience of becoming less solid and partially morphing out of this 3-D reality.

In the photo this fascinating morph process has been captured on film. You can see that Justis' upper body, especially his head has gone very hazy, and his arms really aren't there at all. Around his legs the morph is less strong, but it's still enough to make them also look rather blurred. Behind him we have indicated what seems to be a set of etheric wings. It came as surprise. I didn't imagine the announcement in the morph of the arrival of man with wings meant that we would actually see it in the etheric. But there it is. The other person in the photo beside Justis has remained in his normal solid state.

Under Justis' chin is a dark blob. It's hard to make out what it is in the original photo but once we zoomed in and sharpened the image a bit, we could see it is a discarnate entity. We have circled it in the photo so it is easier to see. It looks like a male. He seems rather dark to us. Justis is bent over the being, wrestling it away. Time to leave? Shoo!