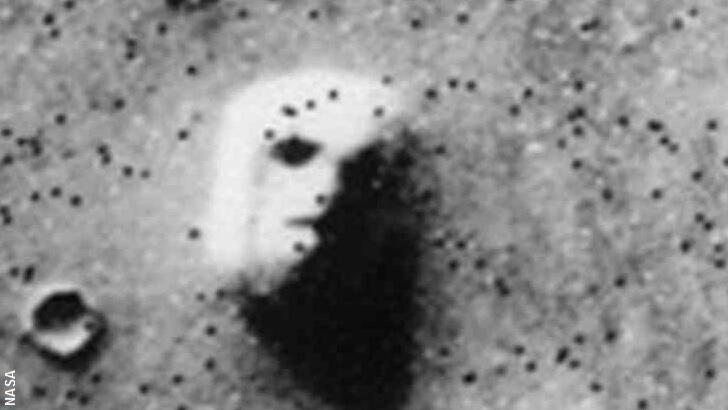 'The Face on Mars' Turns Forty

Forty years ago today, NASA's Viking 1 orbiter captured an image which electrified the paranormal community and became a pop culture icon: 'The Face on Mars.'

The enigmatic formation on the surface of the Red Planet which seemed to resemble a face spawned a veritable cottage industry of theory and speculation surrounding an ancient Martian civilization.

It also gave rise to a whole new subgenre of the paranormal where researchers arduously study NASA images in the hope of spotting something anomalous.

These efforts have lead to a plethora of strange items seemingly seen not only on Mars, but also on other planets and the moon as well.

One surprising aspect of the origin story for 'The Face' is that, unlike the myriad of modern day anomalies spotted in NASA images, the space agency actually noted the odd visage when they released the photo!

In a caption which they may now regret, NASA said, "the huge rock formation in the center, which resembles a human head, is formed by shadows giving the illusion of eyes, nose and mouth."

Although subsequent images in later years seemed to show that it truly was a "trick of light and shadow," the clearer photos have done little to quell the belief of some researchers who see the anomaly as a centerpiece for a vast lost world on Mars.

Regardless of its nature, 'The Face on Mars' certainly found a place in the zeitgeist as it has made numerous appearances in movies, television programs, video games, and other areas of entertainment over the years.

Ironically, there is one instance of 'The Face' in pop culture which has fueled conspiracy theorists who contend that it truly is a monument of some kind.

In 1958, a full thirteen years before the anomaly was photographed, legendary comic book artist Jack Kirby actually wrote a story titled 'The Face on Mars' where astronauts journey to the Red Planet and discover a giant face left behind by a lost race of Martians.

Some see the uncanny coincidence as more than mere happenstance and argue that Kirby had inside knowledge about 'The Face' that he revealed in his work which later became eerily prescient in 1976.

And while most of the mainstream population has dismissed 'The Face on Mars' as a curious amusement, there remain many diligent researchers who contend that it is the key to unlocking an incredible mystery.

One thing seems certain: questions about 'The Face' will likely continue well into the future until humans actually venture to the Red Planet and can see it for themselves.

Coast Insiders looking to learn more about the iconic 'Face on Mars' and other anomalies from the Red Planet can check out C2C's Mars Special from 4/10/2014.