Home > Articles > The Highs and Lows of Flat Earth: Observations of a Dallas Gathering
November 21, 2019 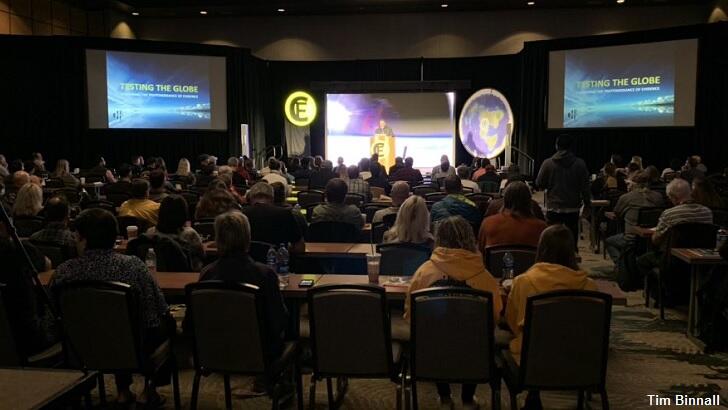 The Highs and Lows of Flat Earth: Observations of a Dallas Gathering

They came from as far away as Australia, England, and Sweden, and were the hardest of the hardcore Flat Earth believers. Attending the fourth Flat Earth International Conference last week in a suburb of Dallas, TX, I had the unique opportunity to sit in on the festivities of this much-maligned and often misunderstood community of conspiracy theorists. A selection of pictures from the event can be found here.

While the nature of the Flat Earth may lead one to suspect that the conference (which included workshops and lectures) would be teeming with basement-dwelling and belligerent conspiracists, the people I met at the wildly festive event were far from the stereotype that has been foisted upon the Flat Earthers. Truth be told, there were less outlandish personalities among the 600 or so people in attendance than can be found at nearly any moderately sized UFO convention. In fact, the Flat Earthers I spoke to over the course of roughly four days were almost disappointingly ordinary people who were simply thrilled to be around fellow believers because, as one man told me, "the isolation is almost intolerable at times."

And, to their credit, rather than try and sell me on the Flat Earth theory, they were more than understanding when I made my intentions clear that I was simply there to observe the proceedings and not engage in any debate as to the shape of the planet. For the record, I believe the Earth is round, despite my time in the weeds this past week with those who vehemently do not. Remarkably, from what I could gather from my conversations with dozens of people who attended the event, the vast majority of them had only become believers in the last four years. This is striking when compared to your average paranormal gathering in which the usual level of proverbial service time is at least a decade if not far more.

Another eye-opening aspect of the Flat Earth community was that it seems to be fairly deeply rooted in the writings of the Bible. Countless Flat Earthers referenced it as their primary source for why they believe the planet is a plane covered by a dome existing in a void and not a ball soaring through space. When discussing conspiracies with the people at the conference, the Moon Landing Hoax concept was nearly universally accepted with the idea that NASA's whole purpose was to help thwart the Flat Earth theory in order to ensure that the populace did not learn the true shape of our world as created by God.

When I happened to broach the subject of aliens with the Flat Earthers, I received a rather revelatory response as they consistently and literally laughed in my face over what they said was a wholly preposterous idea. As someone who at the very least entertains the possibility that ETs could be visiting us, it was something I won't soon forget as it was a reminder that we all have ideas that others see as ridiculous. Our disagreements about aliens aside, the Flat Earthers were a gregarious bunch who seemed like the type that would give you the shirt off their back, provided you didn't mind roaming the streets with 'Research Flat Earth' emblazoned across your chest.

However, to that end, my time spent at the event provided a glimpse into what life is like for those who wave the flag of the Flat Earth and it was rather troubling. This began the moment I arrived in Dallas and the Uber driver shuttling me to the hotel asked why I was in town and I haltingly explained that I was there for a Flat Earth convention, realizing that I was now probably the weirdest passenger that she'd ever had. Similar experiences interacting with 'outsiders' over the course of my days among the Flat Earthers indicated that being looked at as crazy by strangers is a recurring phenomenon. This was echoed by a number of people at the event who expressly asked that I not use their names in this article nor take their picture for fear of being 'outed' to their family and work colleagues as a Flat Earther.

That stigma of ridicule and an almost air of danger surrounding the Flat Earth loomed large over the proceedings in a manner far different from any paranormal conference I've ever attended. A police presence is generally not required for a UFO or Bigfoot convention, however this event had a Texas state trooper patrolling the lobby outside of the lecture hall in order to ensure that there was no trouble. I initially thought that perhaps this was merely showmanship, until the officer was needed to mediate a heated dispute between event organizers and a late night television program that crashed the proceedings in order to film a comedy skit.

Similarly, in a testament to the passion that the conspiracy theory inspires on both sides of the admittedly lop-sided debate, a podcast that apparently hates the concept of the Flat Earth actually went to the trouble of spending around $2,000 to hire a plane to pull a 'Research Round Earth' banner above the hotel to troll the event. Ever the master strategists, the Flat Earthers got wind of this plan ahead of time and subsequently hired two planes to fly pro-Flat Earth banners in response. This was another first for me as I'd never seen an air battle break out between other paranormal skeptics and believers.

Beyond that admittedly comical 'showdown,' I also witnessed something a bit more unsettling in the form of needless cruelty directed towards the Flat Earthers when I made the mistake of innocently posting some seemingly innocuous photos from the conference on social media. When the pictures were shared by a pro-Flat Earth account, a barrage of downright vicious responses from complete strangers were directed at my account with lightning speed and continue a week later. The sheer volume and vitriol of the messages were stunning especially in light of the harmless nature of the Flat Earthers and their largely benign belief system.

By the time the conference had come to a close, I'd developed a new respect for the Flat Earthers considering what they're forced to endure due to their advocacy for the odd idea they've come to accept. That said, I was also ready to return to the world of the Round Earth, where you're not constantly wondering if you're being laughed at or having to answer endless questions about how the curious conspiracy theory works. Ultimately, my time among the Flat Earthers left me with a far better understanding of their unorthodox perspective on the world and an appreciation that they welcomed me, a lowly Round Earther, into their community with handshakes and hugs rather than rejection. As a result, I may not have converted to their side, but I'd happily call myself a friend of the Flat Earthers after my days spent 'under the dome' with them.