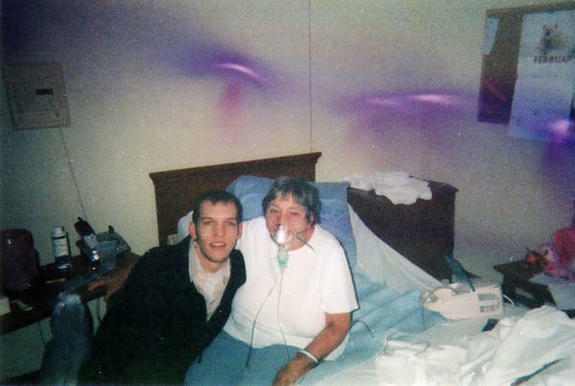 In February of 2009 my boyfriend, Joe, flew back home to New York to visit his grandmother as she was very ill. He bought a disposable camera while he was there since he knew this may be their last meeting. He visited his grandmother at her nursing home in Gasport and had several photos taken of the two of them together. Just a few days after that, his grandmother passed away. Upon returning to Alaska he set the camera aside for a couple of weeks.

When he finally had the photos developed he noticed that one of the pictures had some interesting purple forms above their heads. He couldn’t explain what it might be as none of the other photos had anything strange about them. Joe and I started dating about a year later and when he showed me the photo I was blown away. I have never seen anything quite like this and photography is a hobby of mine. During a recent move, the photo resurfaced and Joe and I agreed that it was worth sharing. There's no telling for sure what is happening in this picture, but it definitely gives the impression that she had some sort of spiritual energy around her as she approached the other side.