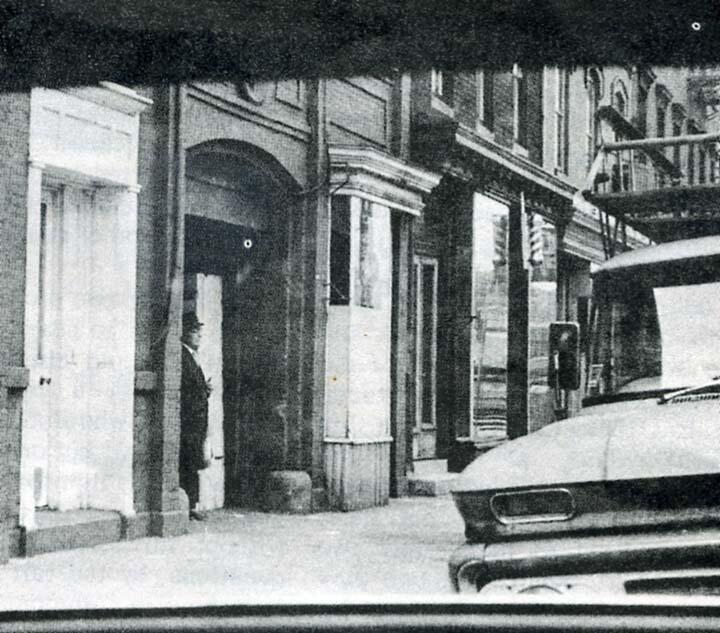 Prolific author and UFO researcher Timothy Green Beckley was our guest in Streamlink's Live Chat last week, for a one-hour Q & A. Below are excerpts (members can view the full transcript) in which he delves into the mysterious Men in Black phenomenon. Pictured is a photo he took in 1968 that may show one of the MIBs.

Timothy Green Beckley
Hello everyone. I can tell you something about the Men in Black if you would like. I first read a book by Gray Barker called "They Knew Too Much About Flying Saucers." This book detailed the experiences of a gentleman by the name of Albert K. Bender from Bridgeport CN who was visited by three gentlemen who materialized in front of him all dressed in black.

Hobie
Are the mysterious Men in Black still active?

Timothy Green Beckley
Yes they are still active today. . .there have been several recent cases which we detailed in an episode of UFO Hunters that will be broadcast in a couple of weeks. We had a case which we detailed - that isn't all that recent -- though there is still UFO activity in the vicinity where his encounter with the MIBS took place. It is known as the Paul Villa story. Paul took some amazing pictures of UFOs about ready to land on the ground. His truck was turned over. His home was set on fire. He was threatened.

maxi1
The amount of time the Men in Black show up is very quick - too quick for normalcy.

Timothy Green Beckley
In the case of Johnny Sands who taped the UFO Hunters episode with me. . .he was in a casino in Las Vegas when two men approached him that he realized were not normal and he had security follow them and security said they disappeared right in front of their eyes.

Guest
Were they able to see them on casino video?

Timothy Green Beckley
Well, you have to listen to Johnny tell his story -- he did pass a lie detector test. And in fact the person who set it up and vouches for his story is the head guy at one of the large casinos in Vegas. These fellows were more human looking and claimed to be making a TV show out of Johnny's encounter with alien beings. But when he went back to their office they were gone and everything was missing.

San Jose Ben
Who or what are the Men in Black?

Timothy Green Beckley
Well, some of them could be government agents -- but that's in rare cases. A number of researchers think they are a security force for the "aliens" themselves. I put aliens in quote marks because we really don't know if the beings behind the UFOs -- if they are beings -- are really from off this world.

It would seem that they have a more underhanded purpose -- or at least some of them do. I personally believe that many of the MIBS are from another dimension -- sort of like ghosts -- and don't even realize where they are or what they are doing. They are in a "sense" wandering around in a daze.

mike777
Are there photographs of these guys and are there women in black as well ?

Timothy Green Beckley
Yes, I did sort of "encounter" a MIB myself which is what I discuss on the forthcoming show. It was in 1968 at the height of a UFO flap in the NY, NJ area that involved some creature sightings-- a couple of events where UFOs nearly touched down and landed. A gentleman who I was associated with had collected a great deal of material on this UFO flap as well as material related to beings said to be living underground.

When he went to work in the AM his wife claimed that a MIB was watching their building from across the street on several occasions. I went to the spot with my associate Jim Moseley and there was a strange individual dressed in blacked which I photographed. The picture is on the C2C web site from my previous appearance.