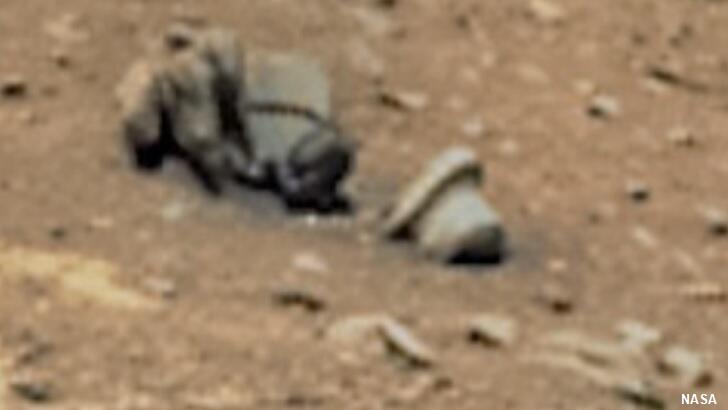 An anomaly hunter scouring NASA images of Mars for out-of-place objects spotted a rather dapper-looking oddity in the form of what appears to be a top hat. The strange discovery was made by indefatigable UFO researcher Scott C. Waring who noticed the possible piece of formal headwear sitting on the surface of the Red Planet in a photo taken by the Mars Curiosity Rover. Posting about the find on his website, he observed that "the hat is sitting on its side and is partly buried under the Mars dirt."

How a top hat wound up on Mars is a matter of conjecture, of course, but Waring theorized that perhaps it was left behind by a human who had been abducted and taken to the Red Planet. "However this top hat got on Mars," Waring groused, "it's just the fact that it's there that really gets my goat." That said, he did concede that his interpretation of the image might be incorrect and offered the 'more plausible' explanation that it could be "some kind of alien cooking pot."

The obvious retort from skeptics is that the object is neither a top hat nor a cooking pot and, in fact, is merely a rock that looks out of the ordinary due to the phenomenon of pareidolia. While we're inclined to agree with that assessment, Waring is certainly correct when he says that, if it is a top hat, "the story of how it got there might be even more interesting that the item itself." With that in mind, give us your best theory for how a top hat could have ended up on Mars at the C2C Facebook page.