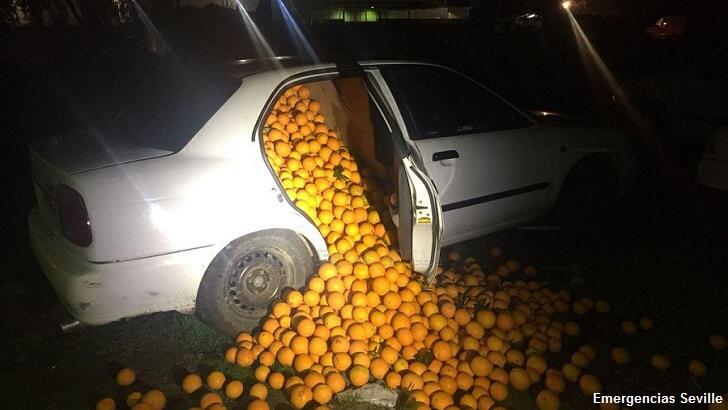 Authorities in the Spanish city of Seville busted a gang of ne'er-do-wells who were attempting to transport nearly 9,000 pounds of stolen oranges in their two cars!

After cops stopped the vehicles for driving suspiciously, officers were astounded to discover that the cars were crammed with hundreds of oranges.

The fruit was so haphazardly loaded into the cars that it actually came spilling out onto the street when police began trying to get to the bottom of what they'd uncovered.

When questioned about how they'd manage to accumulate so many oranges, the suspects coyly claimed that they had been collecting them throughout their travels.

As one can imagine, police found their claims to be pretty unbelievable, considering that there were more than four tons of oranges amassed among the vehicles.

Their doubts were confirmed when it was later found that the fruit was actually pilfered from a warehouse close to the city.

The group now faces robbery charges as well as whatever types of fines come from illegally transporting tons of fruit without the proper paperwork.