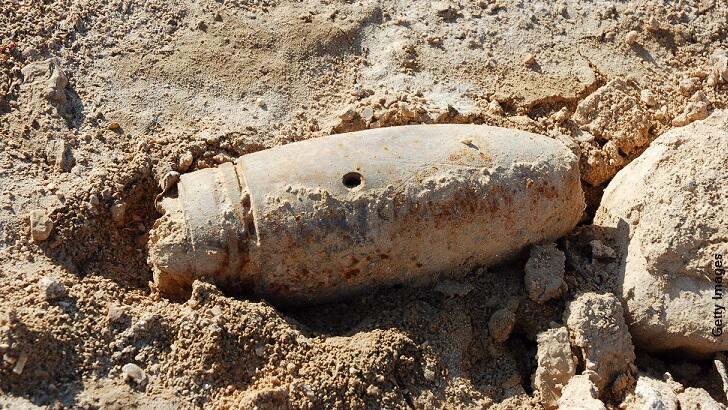 A teenage treasure hunter in France was left badly injured when he unearthed an undetonated bomb from World War I that promptly exploded. The bizarre incident reportedly occurred a few days ago when Paul Aiden was exploring a wooded area near his home in the city of Metz in the hopes of discovering some long-lost coins. When his metal detector lit up with an indication that he stumbled upon something sizeable, the teen began furiously digging and then disaster struck.

Suddenly, Aiden was sent soaring backward by an enormous blast that left him covered in blood and feeling "completely disoriented." Realizing that he was missing his index finger, the stunned treasure hunter ran home and called an ambulance. He was subsequently transported to a local hospital where doctors reattached the displaced digit and removed a jaw-dropping 50 pieces of shrapnel from his body.

Authorities investigating the case later determined that the cause of the explosion had been a dud bomb from WWI which had apparently been activated when the treasure hunter jostled it. Despite the gruesome injuries sustained from the blast, the self-described military history buff expressed an odd appreciation for the weird event, marveling that "it felt like I was being transported back to 1914" when the bomb went off.