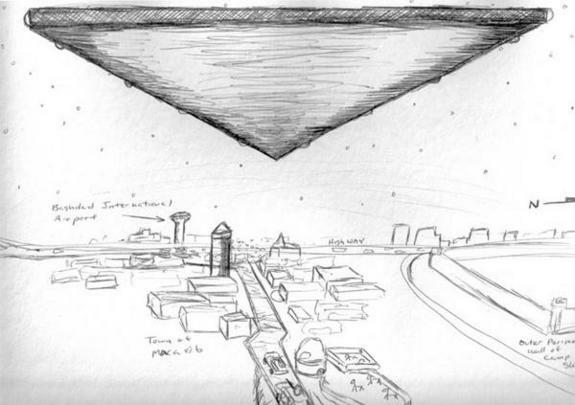 In tandem with her 10/30/14 reports, Linda Moulton Howe shares this sketch of a black triangle seen over Iraq, and provides the following details:

At 10 PM, on June 13, 2006, a little south of Baghdad, Iraq, a U.S. Army platoon of 25 men based at the Radwahnian Palace complex were headed into Makasib not far from the Baghdad Airport for night curfew patrol. In the early morning of June 13th, U.S. President George W. Bush made a surprise visit to Baghdad.

\This sketch depicts the gigantic, silent, triangular craft that emerged as a black object with straight lines of lights above the platoon as they reached the farm outskirts of Makasib. Eyewitness U.S. Army Sergeant 1st Class David Mark Koch (Ret.) estimated the triangle was 1200 feet long and remained unmoving in the night sky for at least five minutes. Illustration for Earthfiles.com by David Mark Koch.