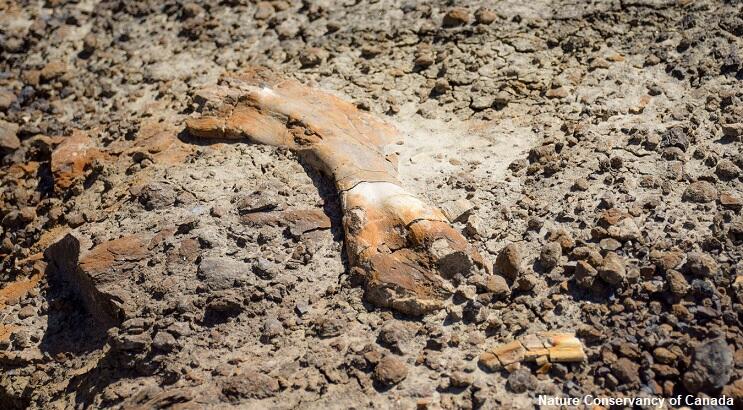 A twelve-year-old boy with dreams of becoming a paleontologist is well on his way to a promising career in the field after discovering a rare dinosaur skeleton while out on a hike with his father. The remarkable find, which was announced today by the Nature Conservancy of Canada, was reportedly made this past July by Nathan Hrushkin as he and his father, Dion, were visiting Canada's Horseshoe Park, which is a location in the Alberta prairies renowned for its fossil lode. While searching for the area for items of possible interest, the youngster was stunned when he stumbled upon a sizeable bone protruding from the ground.

Hrushkin subsequently snapped photos of the discovery and sent them off paleontologists at Alberta's Royal Tyrrell Museum along with GPS coordinates for the find. When a team of experts investigated the tip, they ultimately wound up unearthing between 30 and 50 bones in a project that was finally completed this week. All told, the fossils comprise the skeleton of a young hadrosaur which was likely around three or four years old when it perished some 69 million years ago.

The Nature Conservancy of Canada commended Hrushkin for "serving as the perfect example of what to do when someone discovers fossils," which is to document the find, report it to researchers, and leave the area undisturbed. A paleontologist with the Royal Tyrrell Museum also noted that the discovery is of particular scientific importance "because it comes from a time interval for which we know very little about what kind of dinosaurs or animals lived in Alberta."