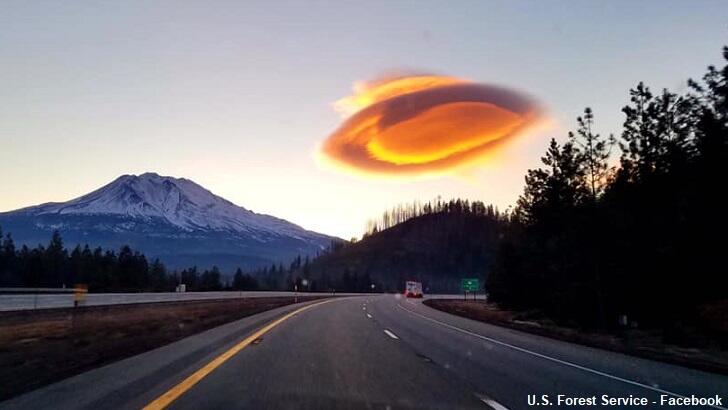 A worker with the U.S. Forest Service snapped a breathtaking image of a cloud near Mount Shasta that bears an uncanny resemblance to a glowing UFO. The photo was taken by Fire Management Officer Paul Zerr last week and was subsequently posted to the Facebook page of the Shasta-Trinity National Forest. As one can imagine, the picture inspired all manner of jokes about flying saucers and aliens, though the department was quick to note that the wondrous sight was not something from out of this world.

As dedicated weather watchers are likely aware, the 'UFO' spotted in the sky near Mt. Shasta is, in fact, a lenticular cloud. As explained by the Forest Service, such formations "normally develop on the downwind side of a mountain or mountain range and "are most common during the winter months." In this instance, the Mt. Shasta cloud happened to be in the perfect position in relation to the sun so that it had an almost eerie luminescent appearance. Despite being fairly well-known, thanks in large part to their 'extraterrestrial' shape, lenticular clouds are frequently mistaken for UFOs by unwitting observers unaware that they are a natural phenomenon.