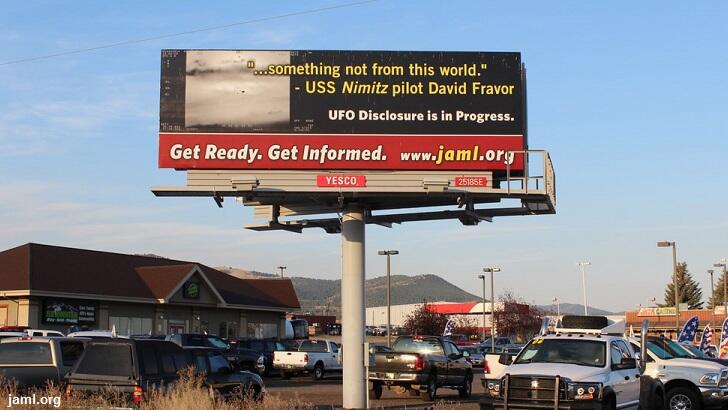 Motorists cruising down the highway in Montana are being asked to contemplate the implications of UFO disclosure by way of a new billboard ad unveiled last week. The signage, which is reportedly located near the city of Helena and is expected to be spotted by a whopping 46,000 drivers a month, features a still from the much-discussed Tic Tac UFO video with Navy commander David Fravor's quote "...something not from this world" alongside the image.

In addition to that eye-catching combination, the words "UFO Disclosure is in Progress" are emblazoned on the ad as well as the suggestion that drivers "get ready" and "get informed." The billboard also directs observers to the website for the Jesse A. Marcel Library, a UFO information center and meeting place located in nearby Montana City. Library founder Dr. Richard O'Connor conceived of the billboard rental which cost $2,500 and lasts for six months.

In keeping with the proverbial hall of mirrors that is the UFO phenomenon, O'Connor says that when he first shared a photo of the billboard on his Facebook page, it was immediately declared by one person to be 'fake.' Rest assured, the ad is very real and he hopes that it is the first of many such signs to appear along highways across America in an effort to raise awareness about UFOs as he believes that it is just a matter of time before we are told about the reality of the phenomenon.