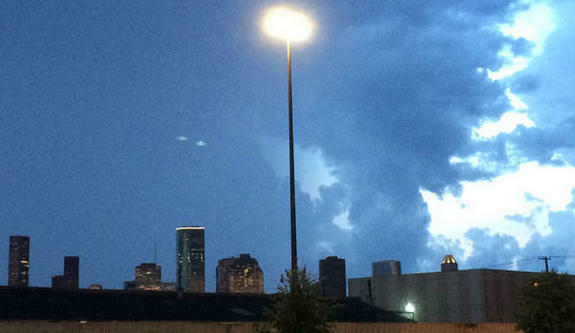 The photo was taken in Houston, Texas on Monday, August 11, 2014 at around 7:30pm in the parking lot of a Kroger Grocery store. On this particular evening there was an unusually fierce thunderstorm in the Houston area. The lighting was very intense. I was walking into the supermarket when I decided to take a picture of the cloud formations over the downtown Houston skyline. I snapped the picture and went on my way. As I was walking through the parking lot I noticed a number of people pointing their cellphones to the sky to take pictures. Not unusual during a storm of this type but the strange thing is that they were pointing in a direction opposite the lightning.

Anyway, the next day there were several news stories on the local NBC affiliate concerning several sightings of UFOs during the storm. I thought nothing of it until a few days later I was going through my phone pictures and came across the pictures I took. For kicks I opened my pic and wouldn't you know one picture had this pair of "lights".

I can tell you that I did not notice anything when I took the picture. I know it is not a reflection of the street lamp because I took another one seconds later and there is nothing in the sky. It is just odd. Any thoughts?