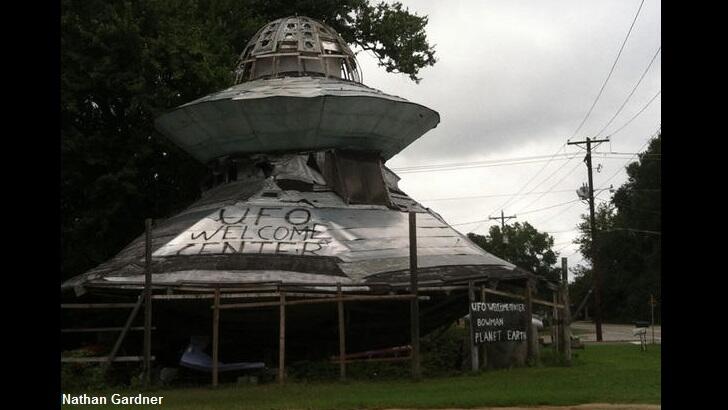 A remarkable roadside attraction in South Carolina, dubbed the 'UFO Welcome Center,' was recently visited by some rather sinister entities: burglars.

Jody Pendarvis, who created the unique landmark in 1994 as a safe place for ETs arriving on Earth to land their ships, says that the site was hit twice by ne'er-do-wells last month.

According to him, thieves first tried to steal the saucer's air conditioner, but their mischievous plan proved to be unsuccessful.

However, the brazen bandits then returned a week later and pilfered the Welcome Center's 32-inch flat screen TV.

The pair of incidents constitute the first time that the 46-inch across saucer has been struck by criminals in its 23 year history, which is rather amazing considering that's a lot of time for bored teenagers to cause trouble.

As to who was behind the crime, Pendarvis pointed the finger at his human brethren rather than aliens, since the perpetrators entered through the front door of the site and not it's ET-friendly top hatch.

Nonetheless, the case is now in the hands of local police, who no doubt hope that the crooks are less elusive than the ETs for which the building was created.

Whether the rash of break-ins will deter the ETs from stopping at the Welcome Center in the future remains to be seen, since they may wish to steer clear of the area lest they lose their ships to saucer thieves.