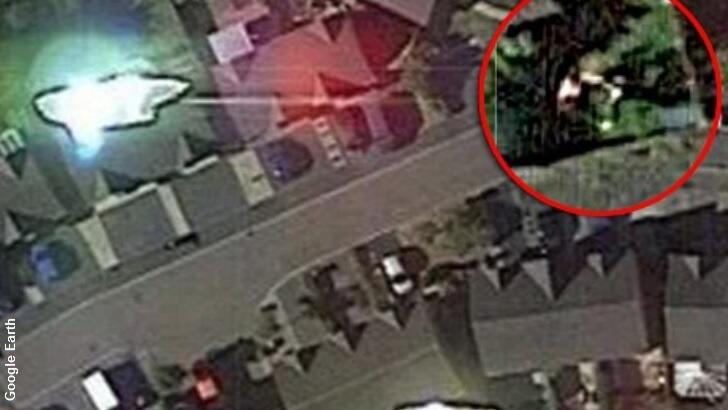 The UK UFO researcher who made news only yesterday for allegedly photographing Robin Hood's ghost is somehow back in the headlines today with another strange tale.

John Mooner claims that a satellite image from Google maps managed to capture a photo of him fending off an attempted alien abduction!

According to Mooner, after experiencing a series of missing time events over the last year, he turned to the service to see if an overhead view of him residence may provide a clue as to what was happening.

And what he saw in the photo stunned him.

The man with the remarkable propensity to find himself at the center of odd events told the Torquay Herald, "the satellite image clearly shows me trying to fight off the grey alien by punching it in the face."

Although Mooner has no recollection of the interstellar fisticuffs, he insists that the 'person' in the satellite image is him.

The would-be abductee also believes that there are three UFOs contained in the image, one of which ostensibly belongs to the alien that got punched in the face.

As noted in our previous piece, coverage of Mooner's exploits by his local media has been met with a backlash as, in a different article, the very same Torquay Herald reported that "many of our readers are questioning his authenticity and off-the-wall claims."

Considering that Mooner has allegedly photographed Robin Hood's ghost and now fought an alien all in the same week, their skepticism is easily understood.

That said, in light of the series of events we've seen so far, we're kind of looking forward to what Mooner may come up with next.