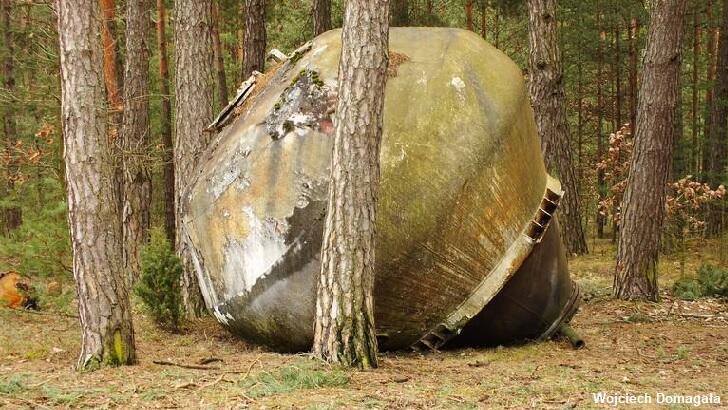 A man exploring a forest in Poland came upon a rather puzzling sight in the form of a mysterious object that some have likened a downed UFO. Pictures of the pear-shaped piece of debris were submitted to the Polish newspaper Echo Dnia last week by a reader Wojciech Domagała, who said that they had discovered the strange and rather sizeable oddity while visiting a wooded area in the province of Swietokrzyskie. The object seems to be metallic and, based on what looks to be significant weathering, may have been in the forest for quite some time.

It appears that Domagała was not the first one to find the anomalous item as he noted that there were a number of empty bottle of alcohol scattered around the site. As for what the object could have been, the newspaper suggests that it could be some kind of construction equipment akin to a concrete mixer. More imaginative observers pointed out that the debris somewhat resembles the famed acorn-shaped craft reported in the legendary Kecksberg UFO case and argued that perhaps it was a downed alien craft.

While we'd love for that to be the case, it's hard to believe that a ship from another world could come down in the wilderness of Poland without the 'powers that be' in the country being aware of such an event taking place nor, if it did happen, that they would have left the craft where it landed. As such, there is most likely some kind of prosaic explanation for the nature of the 'unidentified forest object' and how it wound up in the woods. With that in mind, can you identify the puzzling oddity? Share your best guess with us at the C2C Facebook page.