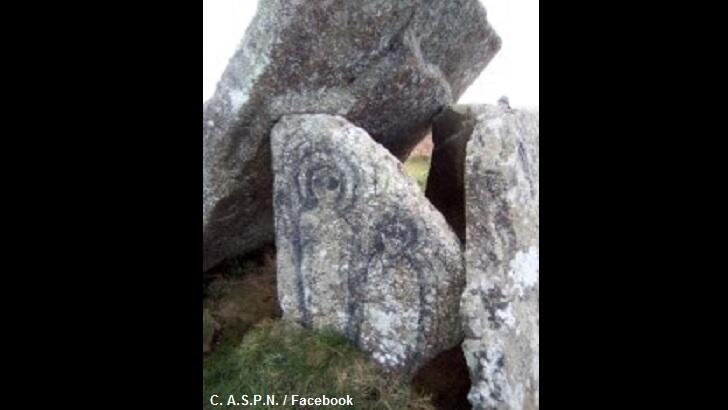 Caretakers for an ancient stone site in Cornwall were aghast to discover that some ne'er-do-wells had painted aliens on one of the granite rocks. The unfortunate extraterrestrial tagging was inflicted upon Mulfra Quoit, a megalithic tomb known as a 'dolmen,' near the town of Penzance at some point around the start of the year. The graffiti was reportedly discovered earlier this week by an organization that oversees the site and visited the location for a monthly inspection and clean-up of the area.

Posting a photo of the vandalism on their Facebook group, the Cornish Ancient Sites Protection Network expressed dismay over the damage, writing "one wonders at the mentality of people who will disrespect an ancient site in this way!" It is believed that the figures painted on the rock at Mulfra Quoit are meant to depict aliens, presumably in an homage to the longstanding theory that such structures were built by extraterrestrials in the distant past.

While it's likely that the gray paint used to draw the aliens can be removed from the rock, the process is not a simple as washing it away with some hot water and a sponge. That's because the site is a protected location in Cornwall and, therefore, any cleaning work will have to be done by government-approved professionals. Sadly, Mulfra Quoit is the second ancient site hit by miscreants already this year as a Bronze Age burial mound in Wales suffered what has been called "appalling damage" at the hands of thoughtless individuals riding off-road vehicles.