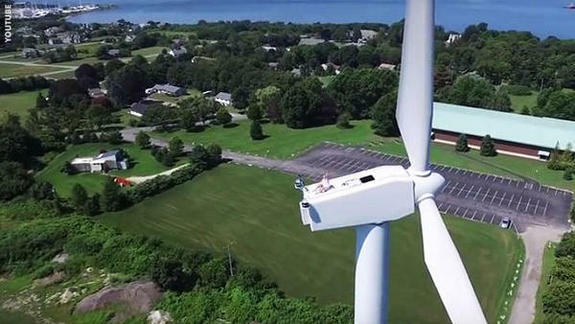 Drones go where no one has gone before, and in this video one caught someone sunbathing high atop a colossal wind turbine in Rhode Island. The pilot planned to only film the turbine, but his camera noticed something odd. There was a man napping, catching some rays high atop the turbine, 200 feet up! Roused by the rotary blades of the drone, the sunbathing gentleman woke from his nap and then sat, sat up and cheerily waved.

The drone pilot, Kevin Miller of San Diego, suspects the 'sleepy timer' was an engineer from within the turbine who had scaled the ladder to take a short break. "Upon landing he saw me bring the drone down and was leaning over the edge," Miller said. "I looked up and wave to him and he waved back. It was a cool interaction between us." Check out the video here.