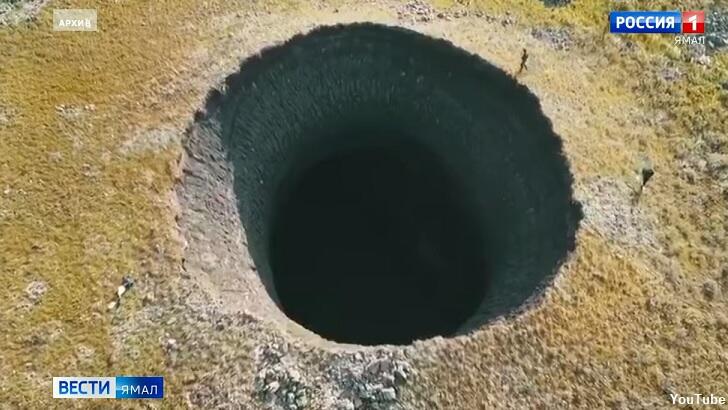 A massive and ominous looking crater believed to have been created by an explosion of methane gas was recently discovered in Russia's Arctic Tundra region. The jaw-dropping pit, which reportedly measures a staggering 165 feet deep and is located on the country's Yamal Peninsula, was accidentally discovered by a Russian television crew who were flying over the area after covering an unrelated event. Much to their profound surprise, their routine trip home wound up providing them with an even bigger story than their initial assignment when they spotted the huge hole in the ground.

While the mighty chasm might spawn some rather fantastic theories for what could have created it, an expert in Russia explained that it is almost certainly a natural phenomenon and not related to UFOs or a clandestine weapons test. Specifically, it is believed that the crater was formed by an explosion of methane gas that had been percolating beneath permafrost which had been melting over the last few months as an unusually warm summer swept over the region. An investigation of the hole after it was discovered bolstered that prosaic explanation as chunks of frozen dirt were found hundreds of feet away from the center of the pit.

Despite the down-to-Earth cause for the crater, its enormity understandably caught the attention of scientists in the region, including one researcher who marveled that the chasm is "striking in its size and grandeur." Meanwhile, an official with the Russian Oil and Gas Research Institute told a local media outlet that the hole was rather remarkable and curiously mused that "it carries a lot of additional scientific information, which I am not yet ready to disclose." Strangely, this is actually the 17th such crater to appear in the region over the last six years and is the biggest chasm to form yet, leading one to wonder and perhaps worry about how much bigger these holes can get.