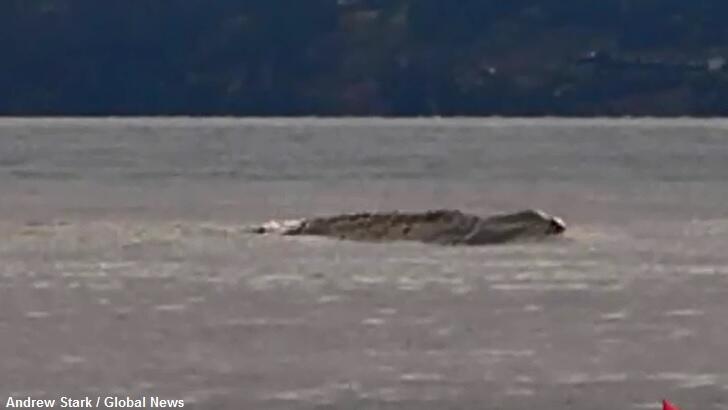 A researcher in British Columbia says that Ogopogo, the famed 'Nessie of Canada,' has made multiple appearances in the last few weeks. Following a remarkable encounter that made headlines back in September, Bill Steciuk, who has been collecting sightings of the creature for the past fifteen years, told a Canadian media outlet that he received two more Ogopogo reports in the weeks that followed. While of the cases was apparently only an eyewitness account, the second report came with a rather intriguing piece of potential evidence.

Andrew Stark wrote to Steciuk's website that he was sitting on the shore of Okanagan Lake, where Ogopogo is said to dwell, when he spotted something strange emerge. "A large moving object suddenly reared out of the lake," he reported, "and moved quickly from left to right in my view." An amateur photographer, Stark was able to snap a photo of the oddity and included it in his submission to Steciuk.

Although the Ogopogo researcher suspects that the image might show the creature, Stark's seemed to pivot from his original point of view when contacted by the media. "That was just a weird wave," he said, refusing any further comment because he was "too shy." Why he changed his mind from the original report, in which he contended that there was no boat nor tremor at the time that could have created such a wake on the water, is anyone's guess, but one wonders if Stark is reticent to be further connected to the creature for fear of ridicule.

Nonetheless, Steciuk marveled that, after long stretches where Ogopogo goes unseen, to have so many sightings in the span of just a month is "totally amazing." The reports will no doubt give the monster hunter hope that there may be a turnaround in the public's perception of the creature as a survey he commissioned back in 1999 indicated that only 8 percent of people said that they would report a sighting if they had one.